Its official, yesterday we received word that the Liquor Control Board approved a new permanent rule allowing minors in Restaurants with Cinemas.

Last fall the liquor board informed us that we were out of compliance with the law because we allowed minors into a theater with a beer/wine license. We had been operating this way since we opened in 2005 but the law had changed in 2010. Faced with either giving up families or giving up our beer license we instead worked to get the law changed to something more reasonable. Thanks to the efforts of Carl Marquardt of the Mayor’s office and Council member Richard Conlin we were able to petition the Liquor Control Board for a rule change. We were able to show the Liquor Board that drinks in a Dinner-Theater can be safely managed for families. The Liquor Board then crafted a new rule (attached) and adopted it yesterday.

The new rule takes effect August 25th and the bonus part is that will be allowed to expand into serving cocktails sometime in September.

I saw the hand written sign out front this morning and now I am enjoying a couple of Mulitas for lunch. For the time being the Taco stand is sharing the kitchen with the Union Market Teryaki counter.

I have no idea which of the many rumors about the truck’s demise are true but I was told that the rent was too damn high.

Anyway it is good to see them making a go of it again. 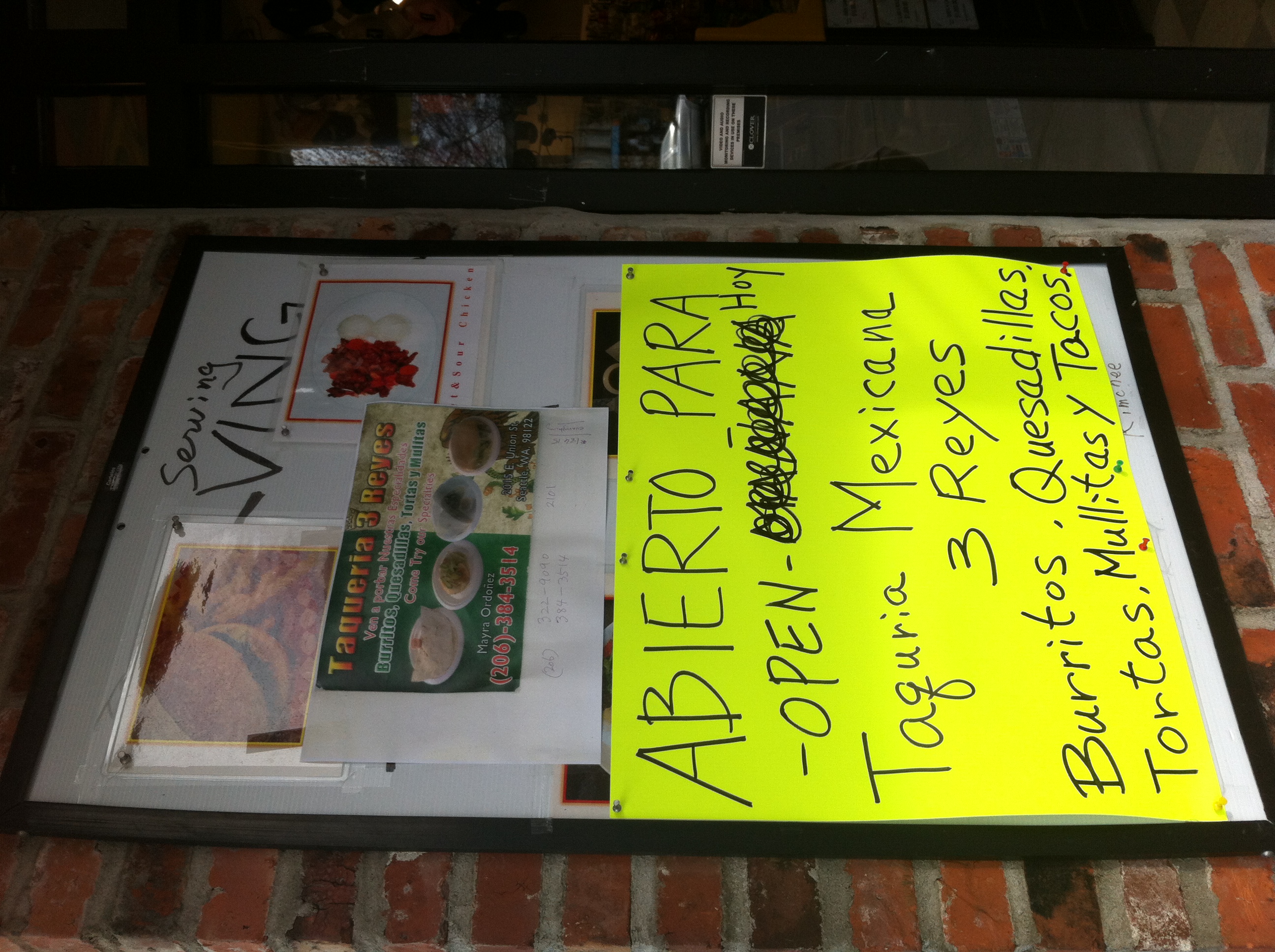 Today is the first day with the doors open and baked goods in the display case. The bakery is still unfinished and the whole selection won’t be available til Monday. It is a soft opening to get warmed up for being a full service bakery very soon. Beehive is serving both sweet and savory baked goods as well as gluten-free baked goods. Cinnamon rolls appear to be one of their specialties with four variations. Only the sweet items are available at the moment but this will be expanded on Monday. Beehive is a certified Kosher bakery with their new certificate proudly displayed on the front counter. There are also espresso drinks and coffee.

The paper has been taken down from the windows but the signs are still in pieces in the dining area. It is still a work in progress but exciting to see the new activity on the corner.

This SDOT Traffic Advisory was just released announcing the repaving of 23rd Ave south of Union starting next week.

Paving Next Week on 23rd Avenue

SEATTLE — Crews from the Seattle Department of Transportation plan to pave 23rd Avenue between Union and Spring streets next week, March 22 to 25, if the weather is favorable. The crews will grind off the old surface and lay new asphalt. When they have completed work on 23rd Avenue to the south of Union Street they will work on 23rd to the north of Union Street. They plan to work from 8 a.m. to 5 p.m.

UPDATE: Tom here. I asked for clarification from SDOT. Paving will be curb lanes (the outside lanes) only, and will stretch basically from Pine to Spring. From Benjamin Hansen of SDOT:

The limits of our paving on 23rd Avenue at this time are E Spring Street at the south (1 block) and roughly E Pine St to the north (2 blocks).  The crew will be making large asphalt patches in the outside lanes, addressing the most severe pavement distress.   This is an area where we have done a lot of pothole filling and received several complaints . The heavy bus traffic has taken its toll on the outside lanes in particular.

The patches are interim repairs intended to keep the street serviceable until the larger project can move forward in 2015, according to the current schedule.  At that time, the entire section of 23rd Avenue between S Jackson and E Madison streets will be repaved.  The 2015 project is a major undertaking and will likely consume a full year’s paving budget.  We would like to do it sooner, but with limited funds and a large backlog of deferred maintenance, it takes a while to make our way through the long list of the city’s paving needs. 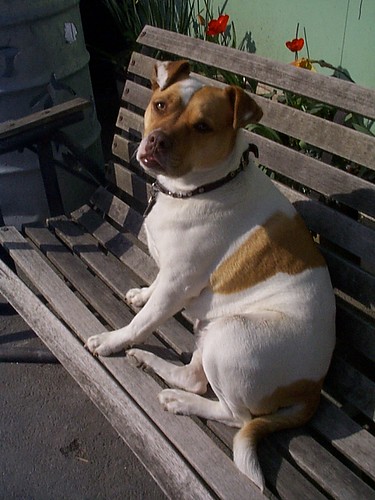 Sofie was not at her usual spot on the porch this morning and has also missed breakfast. She would be somewhere in the vicinity of 21st Ave between Union and Marion. She is a 13 year old bulldog, white with brown spots and a large skin tag on her left hind leg. She is very friendly and loves to be scratched on her backside as well as any friendly attention. Please let us know if you see her at 328-3230 or [email protected]

UPDATE – Kate found her on the porch this morning about 5am. She was not here at 2:30am when I was coming home from the theater. She was clean, fed and rested with no sign of trauma or rugged survival. We still can’t figure out where she went but she was obviously taken care of. Maybe it was time travel and she just skipped ahead three days in the space-time continuum? Three days on a flying saucer? A little break from a dog’s life to go to the spa? We have no idea but we are so happy and relieved that she is OK and didn’t have to live through three days of trauma and stress. Thank you all for looking for her. She is back in her spot as queen of the 21st ave sidewalk.

I was just walking home at 1:20am and there is a large number of police cars and ambulances in front of Thompson’s Point of View and Key Bank.  It looks like about 8-10 police cars and 2 ambulances.  No idea what happened as it is pretty quiet at this point but there are alot of flashing lights.

We were meeting for Sunday night beers at the Twilight anyway and happened to be there for the final night on Madison street.  The new location on Cherry is supposed to be openiong today. 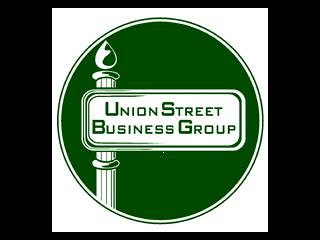 About 4 years ago Jean Tinnea, Darryl Durden, Mike Cruz and myself were working on starting a business group for Union street so that we could collectively work on making the area thrive.  It was a fairly traditional organization with monthly meetings that quickly dissipated due to life being busy for everyone.

Fastforward to this year when I was admiring CleanGreens spanky social networking site.  This could be a smooth way to ressurrect the Union Street Business Group in a more open egalitarian way with less overhead.  We don’t need formal organizational structure to make things happen.  Anyone can join for free, get some ideas going, show some initiative to make things happen, and find help to make positive changes.  This is mostly for businesses in the Central District to have a place to work together and stay in touch.  But we are all interconnected here and a thriving business area and a thriving neighborhood needs everyones input.

So now the Union Street Business Group has one of these nice websites where we can share ideas and get things organized.  I took the existing graphic and made some window stickers for local businesses.  I’ll bring some around or you can drop me a line [email protected] and I will get you one.  So go to www.unionstreetbusiness.org, join up, and let’s see what we can make happen around here.

Just coming home from work when I heard the sirens and revving engines of a police response to something.  Most of the cars on Union were getting out of the way except for an older maroon Japanese car that was being followed by two black undercover police cars eastbound on Union.  It didn’t look like they had much chance of getting away.