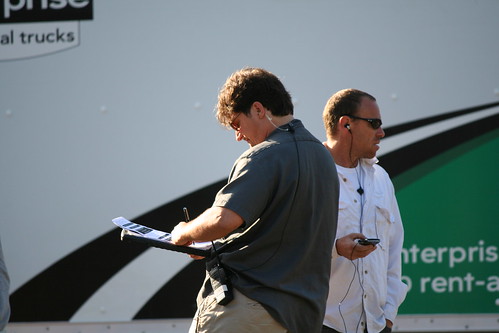 Noticed on the daily dog walk this morning that there are several large trucks parked along both Alder St. and Fir St. between 26th and 27th Avenues, including 4 large tractor trailer trucks emblazoned with the words “Serving the Motion Picture Industry” on Alder St. Appears to be a generator on Fir St. and a truck for studio sound on 26th Ave. near Fir St. The intersections around both Alder and Fir and 26th have been posted with no parking signs (for Thurs 3pm through tonight at 10pm) the past couple of days before these trucks all arrived in the night.

Any scoop on what may be getting filmed here in the Central District / Garfield neighborhood? Did I miss the memo somehow? Just curious to know!

Update by scott: We just walked over and did some sleuthing, and found out that they are filming for The Details, “A black comedy about a couple whose disagreements over how to deal with their raccoon infestation leads to an escalating series of events.” Its got some big name stars too, including Tobey Maguire (Spiderman), Ray Liotta (Field of Dreams, Goodfellas), Elizabeth Banks (40 year old virgin, Scrubs), and Dennis Haybert (24).

But don’t get too excited about seeing someone famous. No stars were visible while we were at the scene, and we were told, without asking, that photos, videos, or interviews with stars would require approval of the production company and the stars’ publicist ahead of time.

They’re filming at the Upper Room Church, which now has a replacement star of David on its peak, and they’ve invited a bunch of snapily-dressed church members to be extras in the movie. A production assistant told me this is their only day at this location, and they have about two weeks left of filming in Seattle.

It’s a huge production, with large trailers full of wardrobe, equipment, and presumably stars taking up on-street parking as far as a block away. And there’s scores of ever-annoyed, headset-equipped production assistants that will be none too happy to see you and work to keep you at a safe distance from the action.

Hopefully the production leaves The Upper Room in good shape. The Seattle Times previously reported how the movie trashed a woman’s home and didn’t initially follow up on promises to fix things up. Based on the number of people and equipment on the set, we’re guessing they’ve cleared up any issues with funding. 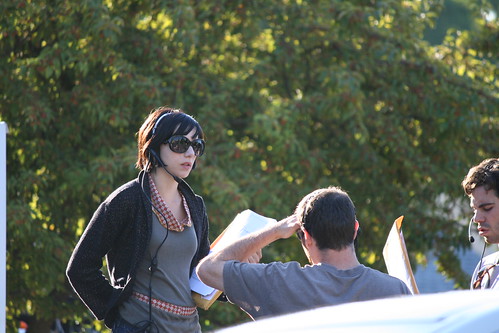 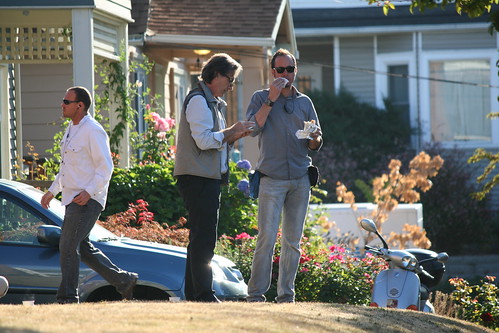 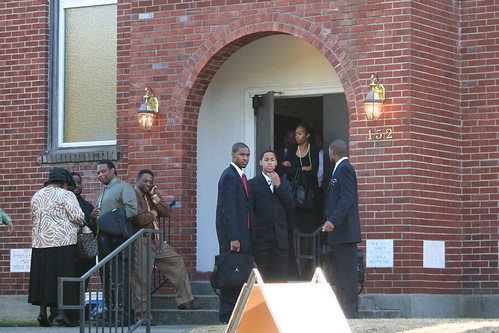 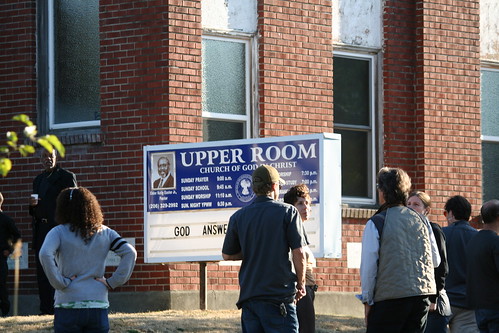 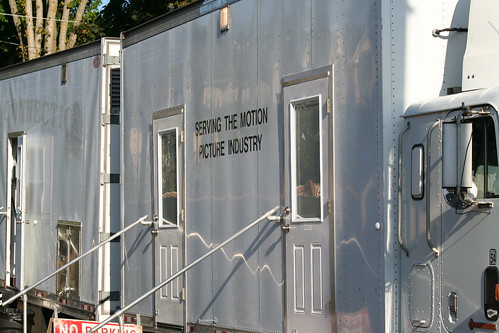 While on my normal morning dog walk route today (Monday 8/24) at 6:50am we encountered two chocolate labs (possibly with some mix) at 26th Avenue and Jefferson St. that appeared to be running free and possibly escaped from a yard. One male and one female, both with collars on and the female appeared to have a license tag and the male no tag. Unfortunately with 3 dogs of my own in hand already I was not able to catch them to check further, so posting here in case someone is in search of them.

I came across an apparently abandoned bicycle on the sidewalk at the corner of 26th Avenue and Fir Street this morning (7/9/09) around 7:20am and two hours later see that it is still there (someone moved it slightly into the grass parking strip). I suspect it is stolen and then abandoned — one plastice pedal was partially broken off and I saw the piece of pedal halfway down the block from the bike. It is an adult mountain bike. I have already called it in to the police non-emergency line (206-625-5011) and they said they were going to send someone by to check on it, so the police department may end up in possession of it if it is not still there in the near future.

I found a cell phone on the morning of 6/20 on 25th Avenue near Fir St. following last night’s apparent teen brawl in the area between 25th and 26th Aves and Yesler Way. I assume this may be someone’s phone from the incident. It won’t power up, so either the battery is dead or it may be broken. If you lost a phone in that area on 6/19 (or early 6/20) email me at [email protected] with a description of the missing phone (make, cell carrier, etc).

Seattle’s first New Orleans style Mardi Gras krewe formed in 2008, Les Faeries Vertes (aka The Green Fairies), will be putting on a Mardi Gras Ball benefit for locally based Breast Cancer Sisterhood on Saturday February 21st, 2009 at the Knights of Columbus Hall on Capitol Hill (722 Union Street at Harvard Ave and Union St).

Tickets to this event are just $65/person and include a full catered dinner, wine/beer/non-alcoholic and some bar drinks, DJ dancing, and a Mardi Gras processional by the members of Les Faeries Vertes. Proceeds from the event go to benefit Breast Cancer Sisterhood whose mission is to support women and their families going through breast cancer treatment.

Tickets for the event are available online by credit/debit card at Brown Paper Tickets. For more information on the event check out Les Faeries Vertes website. We hope you will join us for some New Orleans style Mardi Gras celebrating and support a great cause at the same time!

During my morning walk with the dogs today (7/9/08) I found an apparently abandoned bicycle on the sidewalk on Yesler Way near 25th Ave at around 6:45am. I first passed it near the beginning of our walk and found it still there when we came back around later. It seemed pretty clear that it had been abandoned there and not just mistakenly left out where it was because the spot it was at is not really in front of a house and is instead next to a large hedge. There was some damage to the back tire as well that made it unrideable in it’s current state, so my thought is it may have been stolen and then abandoned once damaged. I took the bike back to my house in hopes of finding it’s owner.

If any of you out there have had a bicycle stolen (or know someone who has) then drop a post here and hopefully Scott or someone else on the CDNews World staff can get in touch with me about how to try and return it to a rightful owner. I have purposely not described the bike here because I would like any potential claimnant to describe it so I can determine if it is rightfully yours. 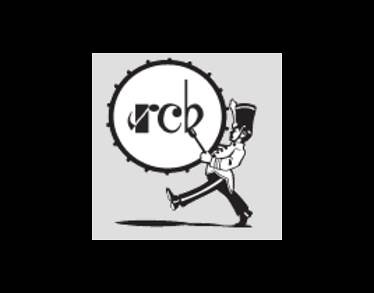 If you live in the vicinity of Immaculate Conception church on 18th Avenue you may have heard music coming from the parking lot Tuesday evening. The RCB Marching Band has started it’s annual marching season rehearsals as of May 6th and will be practicing in the Immaculate Conception parking lot and then taking to the streets around the area for the next several weeks as we prepare for summer parade marching season.

If you are a former band junkie and are looking for a reason to pick up that instrument again and start playing we would love to have you! RCB takes people of all adult ages and skill levels no matter how long you may have been away from playing an instrument. We even have a color guard if you want to be involved but don’t want to play and instrument. We will be marching and playing in 5 area parades this summer from mid-June through mid-July starting with Fremont Solstice.

If you can’t join us, then cheer us on as we practice march around the neighborhood or when you see us in parades this summer!

Find out more about about RCB Marching Band at: http://www.rainbowcityband.com/index.php