Central Area Development Association (CADA) and First A.M.E. Church will be partnering to community build at F.A.M.E’s future community center—and we need you!  The grass and weeds have become pretty high at the former MLK Jr. Elementary School.  As First A.M.E prepares to begin community center activities, please join us in giving the grounds a well maintained look!

This partnership is also in celebration of NeighborWorks® Week, June 4-11, 2011.  NeighborWorks Week is a national celebration that encourages communities to work together to improve their neighborhoods.  CADA, a non profit and NeighborWorks charter member, encourages you to join us in building a stronger Central Area community.  CADA will provide the tools, gloves and refreshments for this project!

If you plan on volunteering your time or need more info, please contact:  Erica Porter at (206) 328-6987. For more on CADA: www.cada.org or NeighborWorksWeek: www.nw.org/neighborworksweek.

There is a lot of work to be done—we hope you will join us!

NeighborWorks® America is a national non profit that supports community based organizations and is the sponsor of NeighborWorks Week.

The Promenade 23 Shopping Center, commonly known as “The Promenade”, straddles both sides of South Jackson Street.  Anchored by Starbucks, Walgreen’s and Red Apple Grocery, the complex welcomes much activity at 23rd & Jackson.  With most of the neighborhood’s retailers, it is the economic hub of the Central Area neighborhood.

Weingarten Realty is a Real Estate Investment Trust (REIT) based in Houston, Texas.  Weingarten is an industry leader in developing and managing neighborhood shopping centers.  Weingarten’s property portfolio spans the nation.  With the addition of The Promenade, Weingarten now owns five Washington properties between Mukilteo and Puyallup.

George Staggers, CEO of CADA, recently met with a senior vice president of Weingarten.  Insightful information was exchanged by both executives regarding the neighborhood and The Promenade.  Weingarten’s representative expressed the REIT’s excitement and eagerness in taking The Promenade to its next level of development.

As Weingarten redevelops The Promenade, should the new owner change the name?

CADA announced last week the pending sale of the Promenade 23 Shopping Center.  In making this announcement, CADA was hoping to engage community dialogue and feedback regarding the sale via this the online forum.  Since online forums may not be for everyone, we would like to meet with you directly.

CADA is a non profit community development corporation (CDC).  Our mission is to revitalize the Central Area neighborhood.  Since 1994 we have worked to articulate, advocate and implement community needed change. Therefore community input is essential to our business—as we serve the community.

If you are interested in attending a meeting, please call CADA at (206) 328-2240 ext 4.  Our office cannot accommodate more than a group of ten per meeting.

Please come and share your vision for Promenade 23 and Jackson Street.  If you have the opportunity, please view CADA’s website (www.cada.org) to learn more about our work. We look forward to meeting you!

The Promenade 23 Shopping Center is scheduled to have a new owner by the end of March 2011.  The current longtime and local owner, Promenade 23 Associates, will sell the center to a large Texas based real estate investment group.  The Promenade 23 has the Central Area’s largest concentration of neighborhood retail/commercial space. So this change in property ownership will play a significant role in the future development of the 23rd & Jackson business node.

Promenade 23 will be the company’s first owned property in the Central Area neighborhood.  The acquisition will also make the new owner the largest property holder on South Jackson Street.  As CADA has long worked to revitalize the 23rd & Jackson business node, it hopes to build a working partnership with the new owner.  Hopefully it will be receptive to CADA’s outreach and CADA’s presentation of the community’s needs.

With that said, what would you like to say to the new owners of Promenade 23?

CADA, a non profit CDC, works to revitalize the Central Area neighborhood. For more on CADA, www.cada.org.  And CADA is now on facebook!  Check us out! 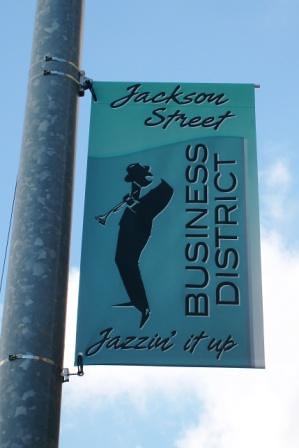 The banner tag line, “Jazzin’ it up”, gives a nod to Jackson Street’s jazz music history.  It also highlights the revitalization efforts underway along the corridor.  The banners hang in three different colors.

For more on the JSBC, visit www.cada.org/bia.html .

Use a Safety Flag; cross the street safely!

Most flags are near busy crosswalks with no signal lights.  Use these flags by holding them straight out in front of you while crossing the street; waive as needed—a signal for vehicle traffic to stop.  These flags are also reflective for night visibility. 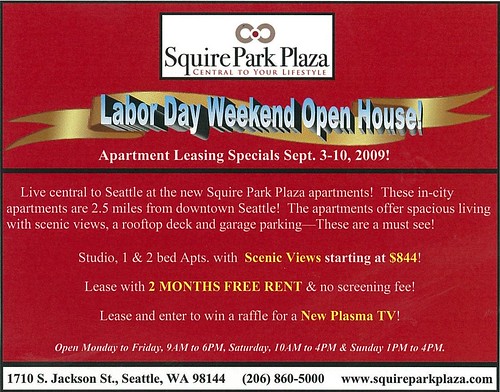 Squire Park Plaza Apartments is having an open house starting this week! Take advantage of leasing specials Sept. 3rd to Sept. 10th. Apartment rents start at $844 per month. We are now offering two months free rent! Please pass along this info. We also have Workforce Housing! Squire Park Plaza has reserved some studios and one bedrooms that are priced for households between 60%-80% of the Seattle area median income.

Seattle’s Mayor Gregory Nickels, the project development team and financial partners will be among attendees and guest speakers. Please come and take a tour of the building. We hope that you will join us!

View the building at www.SquireParkPlaza.com.

Seattle’s Mayor Gregory Nickels, the project development team and financial partners will be among attendees and guest speakers. Please come and take a tour of the building. We hope that you will join us!

View the building at www.SquireParkPlaza.com.

Squire Park Plaza apartments offer more than affordability. The building, newly constructed, is near downtown as well as I-90 and I-5. Unit rents start at $925 and include some utilities. Unit amenities include a washer and dryer, microwave, dishwasher, and a deck or patio. Unit amenities also include scenic views of Mt. Rainier, Puget Sound, the Olympic Mountains and/or downtown Seattle. Squire Park Plaza building amenities include bicycle parking, garage parking, a front door bus stop and a rooftop deck.

Squire Park Plaza offers great apartments–and they are affordable! Please call (206) 860-5000 for a tour or income qualifications. You may also visit www.squireparkplaza.com to view floor plans as well as other building information.