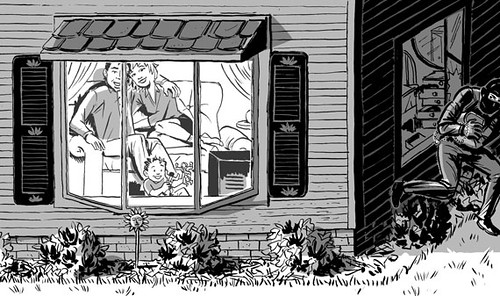 As we have seen every year, property crimes increase in the CD during the warmer months. I was happy to see reported burglaries were down in May 2009, but that does not mean they aren’t still occurring. As a matter of fact, recently some friends of mine in Capitol Hill at 24th and Aloha had their 42″ plasma TV used as a tray on which to pile valuables and then make off down the street.

The Stranger has a good article this week on the alarming uptick in burglaries, saying that about 150 known folks are responsible for most break ins. Not even hiding valuables within your home seems to work any more.

I really like the recommendation to call 911 if neighbors hear breaking glass or splintering wood when these perps force their way in. I plan to keep my eyes and ears open.

My neighbor reported seeing (not kidding) TEN cop cars outside his house at 24th and Madison this morning about 8.30 am. In the back of one car was a perp, who he described as “some skinny little guy.” Are there any reports as to what this was? What happened? 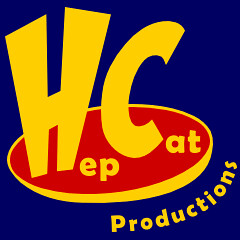 A friend of mine turned me on to swing classes offered right here on the edge of the CD at the Miller Community Center. I’ve taken the beginning class and I can’t recommend it enough. Offered by HepCat Productions, classes meet every Tuesday night at the center at 330 19th Ave E around 7 pm for about 1.5 hours. It’s a great workout, good way to meet people and your neighbors, and a lot of fun. Even for people with no dance experience and who are clumsy like me. Partner not required. 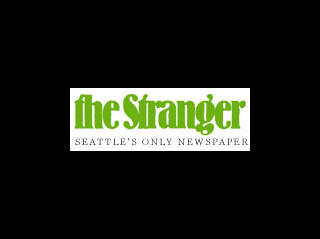 A decent article pointing out topics like unfounded retribution against the music scene. Also discusses possible solutions, including better security at the shows. 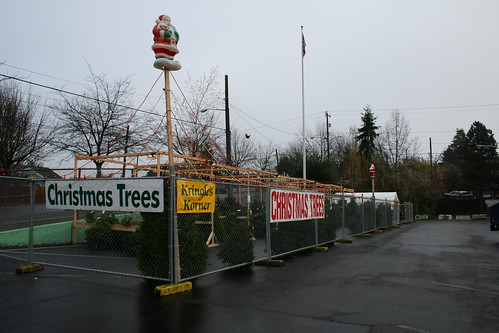 Yesterday I bought a small Noble Fir tree from Kringle’s Korner in the Grocery Outlet parking lot. All proceeds from sales at this lot go to help the Capitol Hill Alano club. Here is the organization’s description from its website:

Founded by Seattle’s recovering gay, lesbian, bisexual, transgender community in 1982, the Capitol Hill Alano Club (CHAC) is committed to supporting twelve-step groups in their primary purpose of carrying their messages to those seeking recovery by providing a safe and permanent meeting place.

They cut the bottom, trim the boughs as you like and even offer free delivery in the local neighborhood. Entire purchase is tax deductible. I recommend them. 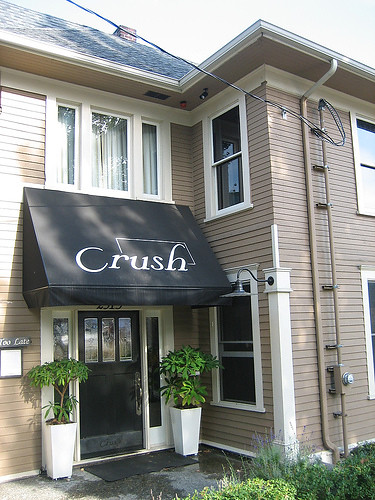 Dine around Seattle is a program where 30 high-end restaurants offer 3-course dinners for only $30 (exclusive of tax/tip/beverages). Many places also offer a $15 lunch. In these tough economic times, it’s hard to justify a $200 meal, but a $30 one is very attractive.

From Nov 2 thru Nov 30th, take advantage of some great meals throughout the greater Seattle area.

Here on the edge of the CD, Crush will participate in the program. Here is the advertised menu, subject to change:

For the past couple of mornings, I have seen a lovely white, newer-model Volvo sedan parked on the west side of 24th @ Olive near the YMCA. The hood was been spray painted with blue paint: There’s a star of David and the words “J Crew.” I don’t have a picture or the license plate, but my gut feeling is that this is an abandoned/stolen car.

If there are any readers in that neighborhood who can vouch for this car, or can help by reporting it (it hasn’t moved in days), I think that’s probably the right thing to do. I am always rushing to work when I see and remember it too late. 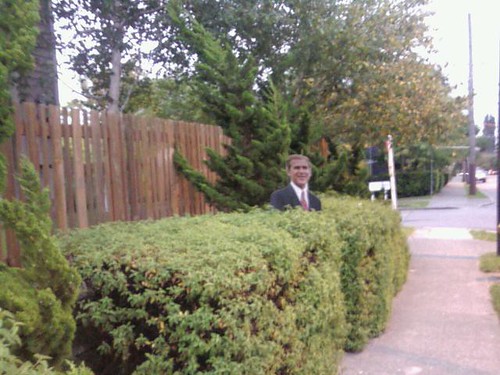 The text of this post is from a co-worker who was staying at her boyfriend’s house, somewhere near 21st and Jefferson. Boy, did we have a laugh this morning!

As the story goes, I came upon this “intruder” at 5:30 am this morning (in the Central District!) when I went outside IN THE PITCH BLACK to walk the puppy. He didn’t say anything, just kept smiling. I grabbed the dog (boyfriend is in New York and I am puppy sitting) and went 5 blocks away to Katy’s coffee until it got light, but when I went back, the “intruder” was still there – so, I called the police. Well, luckily before they arrived, I made my way closer and with it getting light out I realized – yes, someone put a life-size, cardboard cut-out of our dear friend George Bush! See the picture – I know you’d be scared too!! 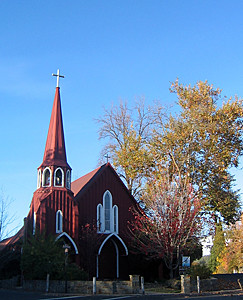 I thought it would be funny to post some News of Record reports from where I grew up, for comparison’s sake. From the depths of the Central Sierra Nevada Mountains, here’s all the crime that’s fit to print. (All reports are taken directly from the published police blotter and are not edited or modified.) Happy Friday!

7:21 a.m., Lake Don Pedro — A man said he was kidnapped from Fremont and brought to Fleming Meadows on Bonds Flat Road. He then said he voluntarily came up but he felt lured there under false pretenses.

8:34 a.m., Twain Harte — A man on Superior Drive at Confidence South Fork Road said a woman told him she “heard on the street” another man put a contract out on his son.

11:55 a.m., Tuolumne area — A woman on the 15100 block of Mountain Lily Road said she was selling her couch online and received eight $100 bills from “Bruse Willis.” The money was determined to be counterfeit.

8:14 a.m., Mono Vista — A woman said five juveniles climbed in the dining room window and vandalized her residence on the 20300 block of North Sunshine Road. She said they were all still there, “passed out drunk” in the house.

8:20 a.m., Tuolumne — A caller on the 20000 block of Hani Drive said someone put flour water and plastic wrap all over a neighbor’s vehicle, and the neighbor is out of town.

9:38 p.m., Sugar Pine — A woman on the 24100 block of Pine Lake Drive said a man was calling and harassing her. She said he rambles in a bizarre manner and claimed to be a neighbor. She said she was “creeped out by the molester-type voice.”

2:36 p.m., Columbia — Gravel and taco spice mix were put in two washing machines at an RV park on the 23200 block of Italian Bar Road.

Midnight, Columbia — A woman on the 10900 block of Green Street said she swallowed gum and was very nervous about the situation.

6:44 a.m., Sonora area — Several reports were made of a shirtless, dirty man with long hair and bloody legs waving a stick and yelling at passing motorists on Highway 108 at Lime Kiln Road.

7:33 p.m., Twain Harte — A 53-year-old woman, who may have been drinking, said she has been beaten for the last three years and is the victim of incest. A deputy, however, determined she just wanted a ride, so he advised her to call a taxi.

9:59 p.m., Columbia — A man was arrested on suspicion of public intoxication after he was banging on people’s doors on the 22400 block of South Airport Road, saying he had been shot and was not wearing pants. No wounds were found on him.

AND THE ICING ON THE CAKE:
6:07 p.m., Columbia — A woman on the 21800 block of Sawmill Flat Road was angry because her 2-year-old daughter returned home from a weekend with her father and had a “mullet” haircut. 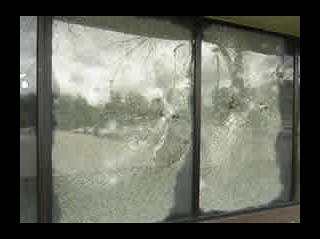 I heard about Armorcoat on this blog and have since obtained a quote for a large window (42″ x 61″) and a glass door (66″ x 20″). To coat all the glass will cost me about $240 with Brower Tint and Graphics on the Eastside. Still waiting on a quote from Seattle Window Tinting.

Here’s what the Armorcoat web site says about it:

“To a thief, a broken window is an open door to the valuables locked inside. Your electronics, jewelry, merchandise and other costly possessions can all be gone in a matter of minutes after a criminal gains entry. Luckily, Armorcoat helps eliminate a burglar’s easiest access route – a broken window. By making a window more difficult to shatter and holding the broken glass firmly within the window frame after breaking, illegal access is much more difficult and less likely to occur.”

I included a picture of what happens when someone DOES try to break the Armorcoated glass. Sure, you end up with a broken window, but you keep Grandma’s jewelry.

The ONLY way an intruder could get into my house now is by breaking glass, because my window has been rendered inoperable and is bolted into its frame. A disturbing number of recent burglaries have happened because of broken windows or second-floor boost-ups. Just a friendly reminder: don’t leave anything outside that can be used to break the window (garden equipment or BBQ tools are common), and never leave a ladder against your house. That’s like saying, “Welcome, Burglar!”

Once I have this installed, I will post a followup about the experience and vendors.

UPDATE: I had Mark at Seattle Tinting come install the UV Armorcoat on the interior windows in my downstairs. They did a great job, despite fighting off my cat’s hair trying to get under the film! The cost for the install and all materials was $227 with tax and took them just over an hour to do three big glass panes. They were also very careful with my furniture and carpets, even taking off their shoes in my house. Nicely done!