SDOT recently posted two alternative Greenway proposals to accompany the 23rd Ave. Corridor Project. The alternatives employ either 21st or 22nd Ave in conjunction with sections of 23rd Ave for the proposed bicycle route. These designs will be discussed at the upcoming community meeting November 6th, 5:30pm, at the Nova H.S. auditorium. SDOT’s invitation, from communication director Maribel Cruz, is pasted below.

The City of Seattle is planning to install a neighborhood greenway—a residential street that provides people of all ages and abilities a comfortable place to walk, ride a bike, skate and run—in the 23rd Avenue Corridor between East Roanoke Street and Rainier Avenue South. To help finalize the decision on the greenway’s route, we’re gathering input at a community open house:

For more information, please visit the project website at www.seattle.gov/transportation/23rdgreenway.htm

Just saw a hit and run at the Ethiopian Cafe on Cherry (west of 23rd). Please keep an eye out for what looked like a good sized American car- silver side panels with blue roof and a hood that’ll be very messed up. This guy hit a parked cab and took off going South on Jefferson. 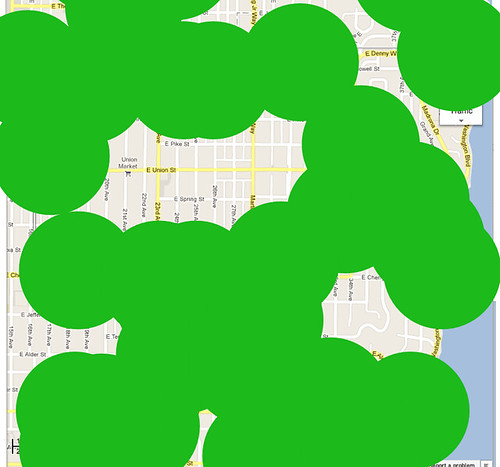 It looks like several cars near our place had their tires slashed last Friday night. I don’t really know how to slash a tire, but it doesn’t seem like garden variety vandalism. Has anybody else in the neighborhood seen cars cut down recently?

UPDATE: The plan was passed by the redistricting committee. See press release at bottom of post.

It looks like the CD may find itself in a new Congressional District. The state’s bipartisan redistricting commission has publicized a plan to fold the CD into the 9th district as a “Minority District” including southeast Seattle, Mercer Island, Bellevue, Renton and on down to Northern Tacoma.  The 9th district is currently represented by Democrat Adam Smith. The Seattle Times has the story (linked below). Interestingly, the northern edge of the proposed 9th district appears to run down Madison, leaving Capitol Hill and possibly Madrona within the 7th district? 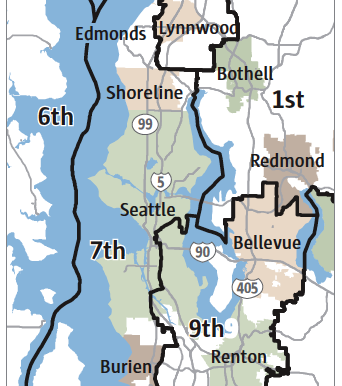 EDITOR’S UPDATE: According to the Times, the proposed new 9th District will be the only district in the state where racial minorities make up over 50 percent of the constituents (actually 50.33 percent):

That will happen by reshaping the 9th Congressional District, now represented by Democrat Adam Smith. The district will still include the north end of Tacoma, where Smith lives, but will now stretch north to include southeast Seattle, Renton, Bellevue and Mercer Island.

“The elected representative of this congressional district must fight to win our support by paying attention to the issues of our marginalized communities,” Nate Miles, of the United for Fair Representation coalition, composed of several civil-rights organizations, said in a statement.

UPDATE #2: Some people requested a more detailed view of the district boundary. Here’s a Google Map of the changes (via The Seattle Times). Looks like the commercial core of Madrona will be split, but most residents east of 35th will remain in the 7th District:

UPDATE #3(1/2/2012): The redistricting committee passed the plan (thanks for the tip Joanna). Here is a map of the version they passed (there are a few small changes in the CD). 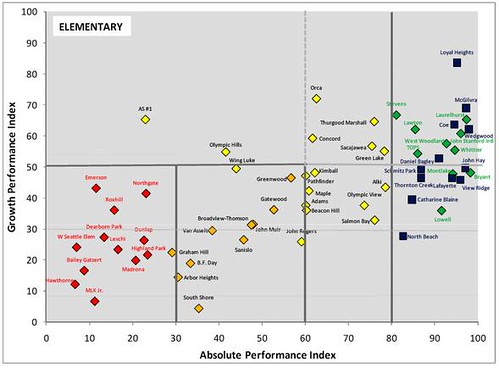 The Seattle Times editorial board thinks the report cards are “promising,”  but the paper hasn’t offered much analysis beyond that ( http://seattletimes.nwsource.com/html/editorials/2016792879_).

One exciting finding for the central district is that Leschi Elementary has jumped from a level 1 to level 3 in the segmentation rankings. That’s pretty outstanding! Our other local schools all maintatined their 2009-2010 levels (Madrona K-8: level 1; Stevens: level 4; Baily Gatzert: level 1). A graph of the 2009-2010 levels is attached to this post. The segmentation levels were discussed last year by the Times:

“SEATTLE PUBLIC SCHOOLS unveiled a new rating system for its schools Tuesday that measures not just how many students pass state tests, but how much improvement students make from year to year. The schools all were ranked on a scale of 1 to 5, with a 5 meaning that a school had a high percentage of students passing state math and reading tests and students are improving. A 1 means that schools have a low passage rate on state tests and low-medium improvement. Here are the schools at each level” 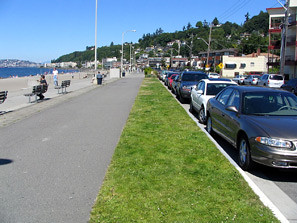 Seattle tops the list of most walkable US cities according to the Pedestrian and Bicycle Information Center. Walkfriendly.org has the run-down ( http://www.walkfriendly.org/communities/community.cfm?ID=53) with lots of interesting facts about municipal efforts to cater to walkers (parking management, pedestrian auditing, and over 1000 traffic circles). Other big cities making the list were Austin, TX, and Charlotte, NC.

Metro has just opened its first route (the A line running from Tukwila to Federal Way) with 4 more on the way, including routes for Ballard and West Seattle (http://www.kingcounty.gov/transportation/kcdot/metrotransit/rapidride.aspx). The idea is to generate light-rail like bus service in high traffic corridors through a combination of 1) more frequent buses (every 10 minutes during rush hour), 2) giving buses some control of the traffic lights and priority lanes like HOV lanes, and 3) Great bus stops that are well lit and sheltered to encourage ridership.

So are any of the 5 lines coming to the central district? Well No.

But metro is advertising the Rapid Ride as a solution for high traffic corridors and the CD has the number one route, the #48 bus running the length of 23rd Ave (http://www.centraldistrictnews.com/2010/08/10/lots-of-popular-frequent-buses-in-the-cd-upgrade-plz). There has been some rumbling about putting 23rd on a road diet (http://www.centraldistrictnews.com/2010/05/25/city-says-stone-way-road-diet-worked-model-for-23rd). Perhaps a complementary idea would be getting Rapid Ride service on 23rd. As a resident of the Central District, I think some good arguments could be made including: 1) The #48 is the most frequently used route in town, 2) Rapid Ride on the #48 route could connect CD residents to the light rail at three points: Mt. Baker Station; The University Station (in a few years); and the I-90/23rd station for the East Side light rail link even further down the road.

So, maybe this is an idea to bounce around- Maybe someone out there is already advocating for it?