Having not heard anything for several months on the status of the Mann Building (Nova) or T.T. Minor, I thought I’d take a tour through the Seattle Schools website.

Looks like the School Board had a meeting on April 15.  Here a link to the Presentation.

Of note are that TT Minor and Mann are not considered buildings that should be held for areas of the city that are expeted to experience  growth in School Age Population.

“Buildings in areas of the City projected for growth but school age population may not be a factor (e.g. Downtown – Capital Hill)

So, what is the future of these spaces?  Will they serve as offices? Educational space? Of will they sit vacant and blight the neighborhood?

After reading the Seattle Times article on Mayor Nickels proposal to use millions of dollars on the Mercer Street Project and to improve the Spokane Street viaduct connection to West Seattle (where the mayor lives), I got to wondering how all the millions of dollars we approved in the Bridging the Gap levy were used.

Here’s a link to the report.  Apparently, the CD got a new stop light in front of Garfield High School.  No new bike lanes, sidewalk repairs, turn signals, transit shelters, or pedestrian improvements were needed in the CD. If you disagree, you may want to contact the Bridging the Gap folks and let them know we’d like to see a little money spent in our neighborhood.  They are currently finalizing the 2009/10 workplan and will post it online at the end of January. 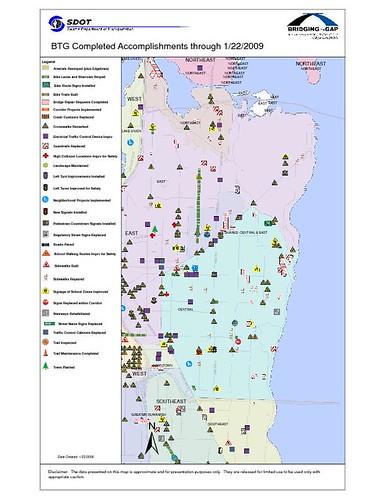 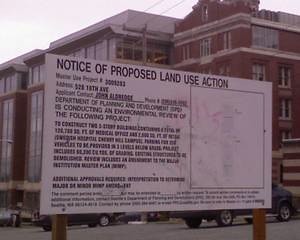 The Squire Park Community Council held it’s quarterly meeting today at Historic Firehouse No. 23 (East Cherry and 18th).  The meeting was well-attended by the community.  The main issues of discussion were to proposed school closures in the “Central cluster”, proposed development along 18th Street at the Swedish Cherry Hill Campus, and the election of board members to the Squire Park Community Council.

Seattle School Board Director, Mary Bass, was on hand to address community concerns regarding the proposed school closures in the Central Area.  Both Ms. Bass and the community strongly oppose the closures, noting that the central area would be the most effected area in Seattle.  Capacity in the neighborhood will become increasingly important as the area becomes more dense and new developments, such as Squire Park Plaza (just completed) and the proposed redevelopment of Yesler Terrace, come online.

The final Public Hearing on the Capacity Management Motion will occur on January 22.

The school board will vote on the motion January 29.

Another hot topic on the Agenda was a presentation given by Swedish Medical Center’s Darren Redick, who presented an update on proposed changes to the Major Institution Master Plan to allow development along the Cherry Hill Campus‘ 18th street border.  The original MIMP adopted in 1994 called for a number of community amenities on that street, including a day care an a gym.  The “minor amendment” that Swedish (and its development partner, Sabey) requested apparently would not include either neghborhood amenity.  Representatives of Sabey did indicate that there would be street level amenities to create a pleasant green corridor for foot and bike traffic as well as street level retail, such as coffee shops and delis.  The Cherry Hill Citizen’s Advisory Committee has not been receptive to the proposed changes and objected to the amendment being classified as “Minor.”  It’s now up to the Seattle City Council.

8 vacant board seats were filled, giving the Squire Park Community Council a complete board.  The next board meeting will be held February 3rd at the Prat Fine Arts Center.

The Central Area Neighbrhood District Council met this evening at the Garfield Community center. In attendance, were approximately 14 people, including Tienne Milnor for the City Attorney’s Office.  The group discussed crime issues, school closure issues, and assistance to returning veterans of the wars in Iraq and Afghanistan. (Note to anyone seeking help for a returning vet in the CD, call 206-720-7008 for advice and referrals.)

Ms. Milnor was able to provide some interesting insight into gang issuses and Garfield’s objection to the Twilight Exit opening on the deserted stretch of East Cherry.  According to Ms. Milnor, the bus shelter at 23rd and East Cherry will be rebuilt to face 23rd Avenue.  It’s believed this will discourage illegal activity.  On the issue of the Twilight Exit, Ms. Milnor conceeded that Garfield was not within 500 feet of the Twilight and therefore had no power to veto it’s opening.  However, she pointed out that NOVA was within the 500 foot range, but conceeded that it likely would be closed and therefore would also not have standing to object to the Twilight Exit.  Ms. Milnor did indicate that the approval for the Twilight was all but wrapped up and that the final step would to have the owners of the Twilight call her to finalize the Good Neighbor Agreement.  Tata Market and AM/PM (both of which are open to teens and sell alcohol) were not required to sign Good Neighbor Agreements.

Ted Divina of the Department of Neighborhoods, Community Building Division was also on hand to bring up some small scale community involvement projects:

Prevent flooding by adopting a drain

Small Sparks provides grants of up to $ 250 for small scale community-building initiatives.  Have an idea?  email Mr. Divina at [email protected].

Help to keep our roads safe by reporting potholes to the City. They promise to fill them promptly.
Enter your pothole reports through this easy form:  http://www.seattle.gov/Transportation/potholereport.htm

The next meeting of the Central Area District Council Meeting will be on February 12, 2009, at the Garfield Community Center (2323 East Cherry Street)

For anyone who may be interested. Here is a request for public records I made to the Liquor Control Board. 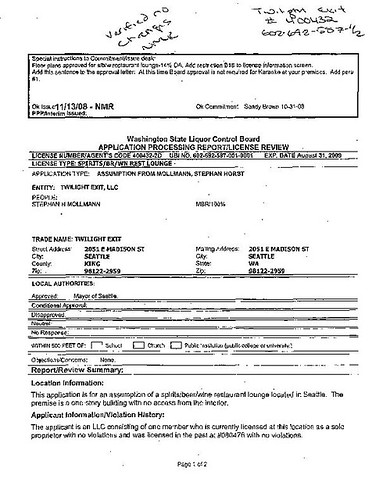