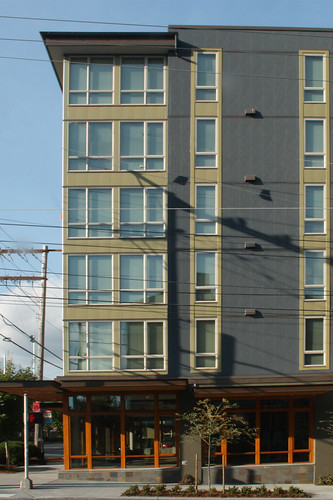 The six-story housing and retail building at 12th and Jefferson is almost ready to open, and Capitol Hill Housing is getting ready to throw a grand opening party October 19.

A polluted lot in central Seattle, vacant for forty years, has been transformed into “The Jefferson” – a vibrant new affordable housing and retail construction project. On October 19, Capitol Hill Housing (CHH) will hold a grand opening for this beautiful building with 40 units of affordable housing and 4,500 square feet of commercial space designed for local businesses.

The celebration will feature a tour of the project and remarks from Seattle Mayor Mike McGinn, CHH CEO Christopher Persons, and other officials from the State of Washington and King County.

This new development will provide 40 affordable one- and two-bedroom apartments for workers earning up to $36,000 for a single person or $41,000 for a two-person family (60% of the median income). The ground floor of the building has vibrant commercial spaces designed to house local businesses.

The Jefferson is built on a former gas station site, situated at a prominent corner on 12th Avenue at the south entry to Seattle University’s business district, just blocks from the burgeoning Pike/Pine neighborhood.

After the property was transferred to City of Seattle ownership in the 1990s, neighbors spoke up in favor of an attractive residential and commercial building rather than a park. In keeping with the community priorities for workforce housing, the site was awarded to Capitol Hill Housing in 2008.

“This is exactly what the neighborhood has wanted for this corner,” stated Bill Zosel, of the 12th Avenue Stewardship Committee. “The commercial space is a great opportunity for small businesses and families living and shopping in the area will keep the street active.”

This project was made possible in part because of federal support secured by U.S. Senator Patty Murray. “I was proud to secure federal funding to expand workforce housing options in the heart of Seattle. This grand opening is great news for Capitol Hill, and for the individuals and families who will call the Jefferson home,” said Senator Murray.

“We are proud to bring more affordable housing to this long-neglected corner,” stated Christopher Persons, CEO of Capitol Hill Housing. “This development supports the priorities of 12th Avenue neighbors, business owners, and everyone invested in the continuing growth of this community.”

Designed by Environmental Works of Seattle, the project is built to the Washington State Evergreen Sustainable Development Standard and has many green features, including heat recovery ventilation units, high performing windows, a low energy elevator and an ultra-high efficiency gas system. Located within a quarter mile of seven bus lines and less than a mile from downtown Seattle, the apartments are designed to promote walking, bicycling, and transit use. The Jefferson was constructed by MarPac Construction.