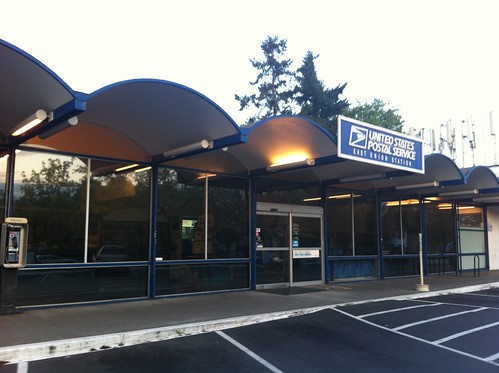 To many, the openings of Med Mix and The Neighbor Lady were signs of 23rd and Union’s long-awaited economic revival. But the trials for the storied corner are not over as businesses and property owners prepare for the departure of one of the Central District’s biggest employers: The US Post Office.

Tom Bangasser—who owns the entire block on the southeast corner of 23rd and Union, including the UmojaFest PEACE Center—confirmed that the Post Office will be vacating the property by April 30, 2013. With a large employment force that helps keep nearby businesses afloat and a large soon-to-be vacated space that could be difficult to rent, the departure could put extra urgency behind redevelopment plans.

Facing the prospect of increased vacancy at the struggling corner, Bangasser said the time for development is here, and those developments will probably need to be tall. How tall? He and other property owners are looking for 65 feet, or about six stories.

“If we knew what the zoning were going to be, we could get going on design,” said Bangasser. Most of the intersection’s properties are currently zoned for 40 feet, which is not as profitable and not as likely to get financing as a 65-foot building. He urges the city to start serious discussions on rezoning the corner soon.

Now, before you immediately label this as gentrification, consider that Bangasser has been connected to the management of the property in some form for 50 years. Obviously, he has a stake in the zoning change: He wants it to be appealing for sale to a developer. But he’s also not some Wall Street fat cat. He and I had a discussion about gentrification that was nuanced and open-minded (which you don’t always get from developers and property owners). He said his parents were involved in the Civil Rights movement, and his father invested in the property because he was concerned about redlining—”why we invested here when others were leaving.”

If he had his way, a development at the site would include “workforce” housing (typically priced a little below market rate, designed to house workers within a quick walk, bike or bus ride from work). He also spoke lovingly of his current business tenants, expressing a level of pride in being able to be a part of their success. He would want them to be involved in any new buildings if they wanted to be.

“We want to make sure our tenants all have a place in that future,” he said. “I have no doubt in my mind Earl [of Earl’s Cuts & Styles] could go into any of these new buildings and make it,” citing Earl’s as a business that started from little and has attracted a strong and dedicated client base.

“I remember signing the lease with Earl access the street in Miss Helen’s with his grandmother,” he said.

The value of the corner seems like a no-brainer. The intersection sees about 35,000 cars per day and is the intersection of two popular bus lines, including King County Metro’s busiest route: the 48. The corner is “remarkably diverse,” as Bangasser put it, and has long been considered the heart of the Central District.

“If you understand change and you’re willing to embrace it, then you’ll probably ask, ‘Why hasn’t it happened yet?'” said Bangasser.

He hopes discussions about rezoning the corner will be an opportunity for members of the neighborhood to discuss what they would like to see happen on the property. That input could help interested developers “get a better idea of what this community is all about,” he said.

On the other hand, the desires of the neighborhood have to mesh with a plan that is profitable in order to attract a developer and financing. And if Bangaser plans to sell the property, there’s no promise the future property owners will necessarily share his hopes.

No matter your opinion on what kind of changes the corner needs, doing nothing seems like the worst option.

“What would be terrible is to have the Post Office gone and boarded up,” said Bangasser, “or vacant like across the street.”

In Part Two, we will look across the street where the site of an approved but financially-stalled 65-foot building has been put up for sale.

50 thoughts on “Times still tough at 23rd/Union, Part 1: Post Office is out, is it time for redevelopment?”