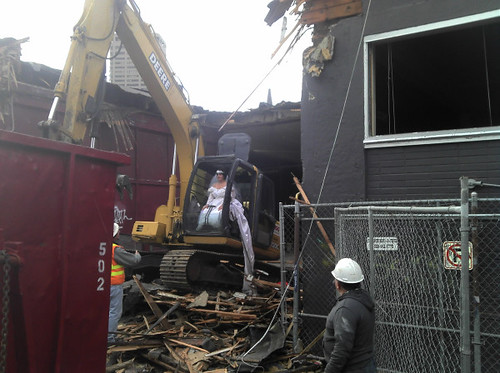 Babylonia Aivaz tried to marry a warehouse at 10th and Union earlier this year, but was rebuffed when bulldozers demolished the structure while she watched, donning her wedding dress.

Now, Aivaz has is ready to give her heart to the entire Yesler Terrace neighborhood, with plans to make the big announcement during a Monday afternoon City Council meeting.

Plans for a large-scale redevelopment of Yesler Terrace are many years in the works, and Seattle Housing Authority needs City Council approval of the plans before major work can begin.

Babylonia Aivaz, widow of the 10th and Union Warehouse, plans to marry the Yesler Terrace Neighborhood. She will make her wedding announcement during a City Council meeting on July 2nd, 2012 @ 2:30 pm.

On July 2nd, there will be a Special Committee on Yesler Terrace at City Hall headed by Council members Sally Clark,Richard Conlin, and Nick Licata to discuss land use, zoning, design guidelines, design review processes, and other key components of the re-development.

It is imperative that important government officials from Seattle support Babylonia’s wedding plans so that THIS TIME her beloved will not be tragically demolished in front of her eyes and replaced with expensive high rise condominiums. Upon hearing the news of Babylonia’s wedding, City Council will become very sympathetic and choose to vote against the legislation needed for re-zoning the neighborhood.

Yesler Terrace remains the last of the four historic garden communities in Seattle. It is a unique and vibrant community with incredible views of the Puget Sound and close to downtown Seattle. It is the first racially integrated public housing project in America, the former home of Jimi Hendrix and Governor Gary Locke, and a gateway of hope for very low-income immigrant families. There is an authenticity and  genuine departure from typical urban architecture here that exists nowhere else in the city. Yesler Terrace is one of a kind. This neighborhood is the best example of community, a creative energy with incredible power and a human need many in the United States do not understand or experience.

A portion of the residents have already been given premature eviction notices by the Seattle Housing Authority before City Council has even voted on the legislation required for the re-zoning in this project.

How can Babylonia fall in love with an abandoned warehouse and now an old public housing project? She states, “ wherever a bastion of community spirit exists that is facing total destruction, there my heart will be.”