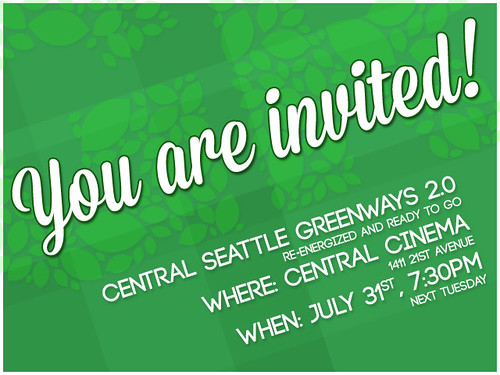 Since holding it’s first large meeting at Central Cinema in February, a lot has happened at Central Seattle Greenways (a group I helped form).

The group partnered with some people already working on a project to reimagine Melrose Ave on the western edge of Capitol Hill and applied for (and received) a $20,000 matching grant to get the Melrose Promenade project moving. It has also been a voice advocating for a complete biking and walking trail on the planned 520 Bridge replacement (sign the petition here).

But what about the rest of the neighborhood? Well, that brings us to the meeting today (Tuesday).

Alexa—a CD resident and one of the main leaders—moved to Portland a couple months ago, and part of Tuesday’s meeting is to find more people looking to take on some leadership. Leadership could mean leading community walks and/or bike rides in your part of the neighborhood or doing some behind the scenes lifting.

So if you want to get more involved, have an idea for a project or just want to learn more, join us at 7:30 p.m. at Central Cinema.

The agenda for next Tuesday’s meeting is:

Breakout sessions (Round One): Route Refinement