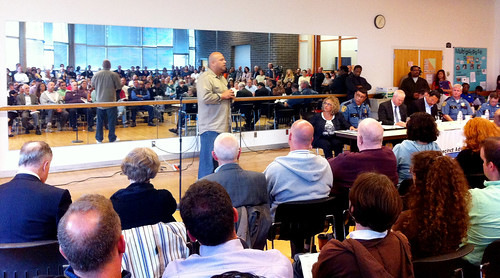 Seattle Police have no new updates to divulge in the “active and ongoing” investigation into the tragic shooting death of Justin Ferrari at MLK and Cherry May 24. The suspect fled the scene on foot and has not been identified.

Initially, police described Ferrari as being caught in the crossfire of a street dispute, and a detailed description of one suspect was posted to the SPD’s blotter web site. Police were looking for “a black male, light-skinned, late teens to 20′s, six feet tall, 170 pounds, hair in corn rows, possibly wearing a dark hat, red jacket with gray or dark-colored panels on it, shorts and red shoes.” This description was also told to CDNews at the scene by an alleged eyewitness.

Now, police say they are looking for one shooter from the incident and described the suspect as only a black male in his 20s. When asked about the change in suspect description, police said that details sometimes change as the investigation progresses.

“Near the intersection of MLK Jr. Way and East Cherry Street the suspect began firing a gun at individuals that he was in a verbal altercation with,” SPD’s description of the incident reads. “The victim was struck by one of the bullets fired by the suspect, killing him. The suspect then fled the scene on foot.”

Ferrari’s two children, 5 and 7, and parents were in the vehicle with him when he was shot in the head. No one else in the van was injured. Ferrari died in his father’s arms.

Last week, community members packed the multi-purpose room at the Garfield Community Center for a forum to discuss recent gun violence. Unbeknownst to EastPAC, the event’s planners, the forum would be preceded by another terrifying day of gun crime. Ian Stawicki went on a shooting rampage that killed four people inside Cafe Racer in NE Seattle and one woman on First Hill. He shot and killed himself hours after the shootings, but not before purchasing a blueberry plant from a West Seattle flower shop and giving it to an acquaintance. Family members describe Stawicki as mentally disturbed.

The rampage put the city on track to double it’s annual homicide totals. The Seattle Times has put together brief bios of all 21 victims so far in 2012 along with a map showing where the shootings occurred.

The evening community forum featured weary city officials and police who said they were there to listen. Community members expressed anger, fear, sadness, hope, and frustration. After one of the worst weeks of violence in the city’s history, people had a lot to get out.

“We have to find a way not just to stop shooting, but we have find a way to stop hating,” said SPD Lt. John Hayes. “I was disheartened by some of the things written in the CDNews,” he said of some comments on our Ferrari coverage. “This isn’t Seattle and this isn’t the CD, but they were words of hurt and words of pain. We need to learn to know each other.”

The conversation quickly turned to issues of gentrification that have left some longtime residents feeling like outcasts in their own neighborhood.

“I don’t know anybody on my streets anymore,” said one speaker. “That breeds tension.” He suggested neighbors try to get to know the youth near your home.

A man with a walker, who had to “go AWOL from the hospital” to attend the meeting said black youth are treated differently, and that youth crime will not go away without improved access to education.

“How the hell are you gonna take the guns out of these kids’ hands and don’t put a diploma in it? That is not their job,” he said of the police and the mayor. “If you folks are sitting here and expecting them to do what you’re supposed to do, you’re bullshitting yourself.”

When it came to the role of the police in solving violent crime, people were split. While some people applauded SPD for their work during a very hard week, others protested police violence like last year’s shooting of woodcarver John T Williams.

People have expressed fear that the conversation will stop once the news of Ferrari’s death fades from the headlines. While CDNews will not stop pushing for new details in Ferrari’s case, we will also do what we can to help keep the conversation alive. As one speaker put it, we cannot move forward in creating a stronger community until we all acknowledge each other’s concerns. That means talking about hard subjects like fear, alienation and gentrification. In this editor’s opinion, we need more chances to discuss these issues face-to-face. Not just so we can try to find solutions, but because the circle of violence in the community hurts everyone in the neighborhood whether you know the victim or not.