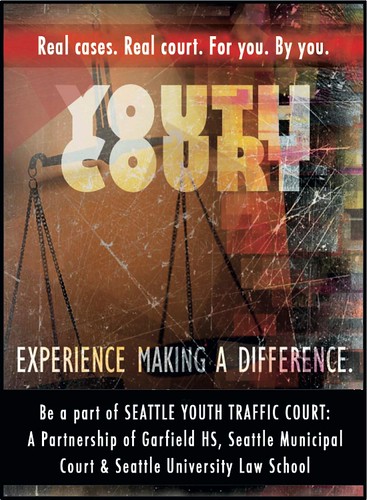 If you are a teen who has received a traffic ticket, you might find yourself in a different kind of courtroom starting this month. Garfield High students will staff a new Youth Traffic Court at the Seattle University School of Law, the first of its kind in Seattle.

Students will be the jury, judge, defense and prosecution for the cases, and they have the ability to impose penalties such as community service, youth court jury duty or education programming. If the ticketed youth takes responsibility and carries out the prescribed penalty, the infraction will not appear on their driving record.

From the city’s press release:

Teen drivers who admit they committed their traffic offense will have the opportunity to have their punishment set by their peers instead of a judge through a new Youth Traffic Court alliance among Seattle Municipal Court, Seattle University School of Law, and Garfield High School.  The city’s first Youth Traffic Court will allow eligible teen drivers to appear before Garfield High School students at Seattle University School of Law, rather than in Municipal Court. The first cases are scheduled to be heard in March.

“Youth courts provide an opportunity for teens to take responsibility for their driving mistakes, while keeping their driving record clean,” said Margaret Fisher, a Distinguished Practitioner in Residence at Seattle University School of Law and a national expert in youth courts, who is overseeing the law school’s involvement.

Qualified defendants will appear before the Youth Court, receive a sanction of community service, youth court jury service, preventative education and/or similar consequences.  If they comply, the infraction will be dismissed and it will not be reported to the Department of Licensing or appear on the defendants’ driving record.

Garfield High School students will serve as judges, jurors, prosecutors and defense attorneys and court staff.   They will be trained and supported by volunteer law students from Seattle University School of Law.  The high school students will take part in an intensive training before the first hearing and will meet with their law school mentors regularly.

“Youth court provides a meaningful civic opportunity for students, who will have the responsibility of deciding real cases,” said Judge Karen Donohue.