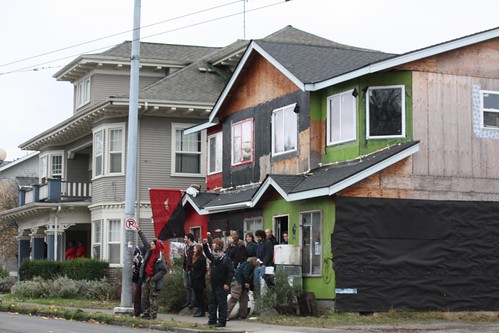 This could be the last day for the people occupying the unfinished 23rd and Alder duplex dubbed Turritopsis Nutricula. A judge ruled against the anonymous residents December 28, giving them ten days to leave the property. The house has been occupied since November 19, when a group of Occupy Seattle protesters marched to long-empty building from their Seattle Central Community College encampment.

The judge ruled that the residents must vacate the property within ten days of the decision (January 7 by our count). After that, police will be able to take action to evict them. The judge also ruled that the defendants can be held liable for rent (plus interest) and any damages discovered.

The home’s legal owner is Denmark West, who owns the property through the 307309 23rd LLC (the entity identified on court documents). Representatives for Mr. West have not returned messages and phone calls from CDNews.

The residents did not go out without a party, though. An “eviction party” was announced on the Puget Sound Anarchists website, and police records show that they did respond to a noise complaint shortly after midnight January 6.

Larry Hildes, attorney for the anonymous residents, said he and his clients are upset by the judge’s decision. He summarized their court argument in an email to CDN (read the court documents yourself in our previous post):

We argued that the actual owner, a millionaire many times over, who is sitting on 307 23rd Avenue and other properties in the City allowing them to deteriorate until he can make a killing on them is fundamentally harming the community, and pointed out that our clients were trying to improve the situation and repaid the building so that it can house tenants not crack deals.  That housing is there for people to live in not leverage for obscene profits, and that Denmark West is not entitled to charge rent for a building that is stripped to the frame, and that our clients were doing what was necessary to improve a bad situation that was not going to get any better without their efforts.

The commissioner who heard the case was not receptive to those arguments, which are not the typical landlord-tenant arguments and found against us.

Our clients have been ordered to leave, which makes us all sad and angry.  We ask the community to organize to hold Denmark West and those like him politically accountable.

Before I became a lawyer, I was a tenant organizer, fighting slumlords and gentrification in New York back in the ’80’s.

We know that that fight will continue in the CD and elsewhere.

It is unclear what kinds of action the residents or the police will take going forward. CDNews will be monitoring the situation.