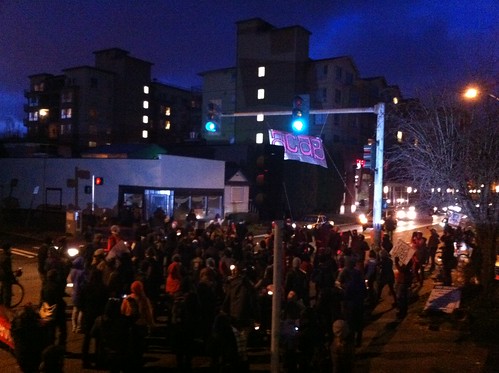 We followed Saturday’s protest against police brutality from the 23rd and Union rallying point to the East Precinct headquarters and, eventually, Seattle Central Community College.

Things got a little wild at points, with some protestors carrying torches and chanting, “We carry torches for our dead. This revolt will never end.”

There was disagreement within the group as some black-clad members started throwing trash cans, car tires and sidewalk signs into the roadway. Other members of the group picked up the thrown items and put them back, prompting some arguments.

In the end, there did not appear to be any injuries or arrests. Police barricaded 12th Ave and Pine for several hours, snarling traffic in the area, especially on Pike.

We live-blogged it on Twitter (if you want some actually good photos, check out Joshua Trujillo’s shots at the P.I.):