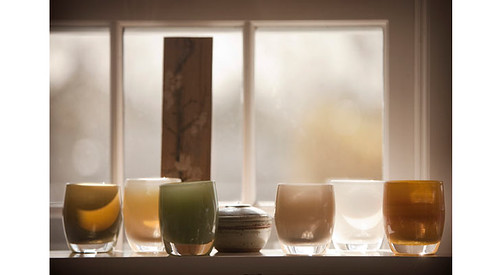 On the heels of a story in the New York Times, Madrona-headquartered Glassybaby and its founder Lee Rhodes were featured in the Seattle Times recently. Over a meal at the Hi-Spot Cafe on 34th Ave, Rhodes and reporter Blythe Lawrence talked about Rhodes’ inspiration for the glass votive endeavor and it’s unlikely success despite going against several standards of business.

Glassybaby has seen a big rise in sales and recently added two more ovens to the Madrona shop.

Glassybaby’s translucent, gently curved votives now come in more than 400 colors, and last year the company’s sales jumped by half to $3.8 million.

Martha Stewart is a fan, and local celebrities, including Amazon.com CEO Jeff Bezos, have stopped into one of Glassybaby’s three Seattle-area locations to offer encouragement and admiration. Bezos was so impressed that he purchased a stake in the company.

So far this year, sales have been up more than 35 percent, and the company expects to top $6 million in 2011. To meet the continued demand, Glassybaby recently added two ovens to its Madrona hot shop, doubling potential output.

For all that, Rhodes is still slightly self-deprecating about Glassybaby’s success. “Most entrepreneurs are super smart,” she said recently over breakfast at Madrona’s Hi-Spot Cafe. “They know what they’re going to do and they have it written down in a business plan. For me it was just entirely different.”