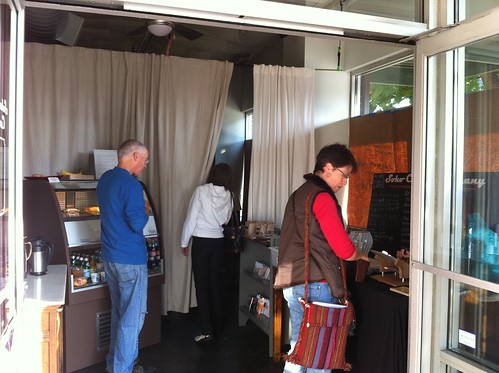 Soho Coffee at 20th and Yesler is undergoing a make-over, and the new look and name will be revealed during an event Thursday evening at 7 p.m.

Barry Faught, who has owned the shop for the three years, said the changes will reflect how he has evolved over the years.

Coffee items available today will still be available, and the shop will continue serving Stumptown coffee. However, they will also feature coffee from other providers at times and will offer pour-overs. Their sandwich provider is also switching to Molly’s Salads, which advertises sustainable and mostly-organic products.

In the meantime, Soho is operating out of the entryway area of the shop with seating outside.

Soho Coffee is unveiling a brand new look, a new name and so much more! They will be featuring new brewing methods that will provide a wider selection of coffee’s to try, roasts from other fine roasters outside Seattle plus new exciting pastries and a new selection of sandwiches for breakfast and lunch. (Stumptown will still be Soho Coffee’s primary roaster and Macrina Bakery will still be the primary bakery.)

You’re invited to an exclusive unveiling of Soho Coffee’s new look! Here are the details…

What to expect: Lots of amazing coffee and conversation so come one, come all!

Special Note: Soho Coffee seating area will be closed Wednesday, October 19th and 20th however we will still be serving coffee. Soho Coffee will be fully open for business again on Friday, October 21st at 6:30am.

Proprietor Barry Faught has spent the past year making this dream of expanding Soho Coffee into a reality. Barry opened Soho Coffee over three years ago and has spent countless hours developing his knowledge of coffee, coffee preparation and fine tuning these skills.