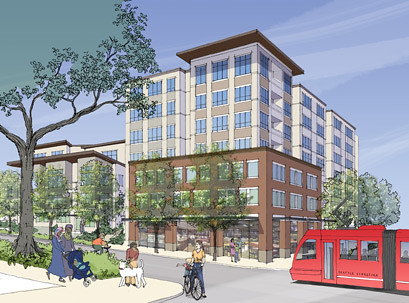 The Seattle Housing Authority has received a $10.27 million grant to begin work on a low-income housing building east of Boren at 12th. The building is the start to a planned large-scale redevelopment of the neighborhood approved by the Housing Authority in April.

The grant is a Choice Neighborhoods grant from the Department of Housing and Urban Development, and the project was competing with several other housing authorities around the country.

From the SHA press release:

Housing and Urban Development (HUD) Secretary Shaun Donovan announced today the award of a $10.27 million Choice Neighborhoods implementation grant to the Seattle Housing Authority to be used for redevelopment of Yesler Terrace and the surrounding neighborhood.

“This is a great day for Seattle and the countless families who will benefit from the transformation this funding will bring to the Yesler community,” said Donovan.

The Choice Neighborhoods Initiative looks to transform distressed neighborhoods into sustainable, mixed-income communities by linking affordable housing with quality schools, public transportation, good jobs and safe streets. Seattle Housing expects to use the grant funding to begin the Yesler Terrace redevelopment by building low-income housing on a site east of Boren, and to work with partners to improve outcomes for neighborhood families.

As a “Master Planned Community,” Yesler Terrace’s full plan could take 10-20 years to complete. The plan includes 661 “extremely” low-income units to replace the 561 currently in the neighborhood as well as 290 “very” low-income units and 850 “workforce” units. In addition, the plan calls for 3,199 market-rate units, mostly in high-rise condo and apartment buildings.

Some have raised concerns about what could be lost in the redevelopment. See our feature from earlier this year for more (part 1, part 2).