Starting at one end of the spectrum, there’s the James Beard award-winning Crush, Anchovies & Olives–Ethan Stowell’s song to seafood, Marjorie‘s Southern soul, and Skillet–one of the most red-hot spots in all of Seattle. 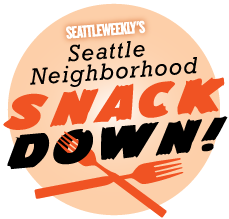 Moving through the cuisines of the world you can find the city’s best Ethiopian at Adey Abeba, Mesob and Saba; Southern spice at Catfish Corner and Oprah’s favorite fried chicken at Ezell’s. Teriyaki fans can get a great, cheap dish from the small kitchen inside Union Market (which also boasts the city’s most diverse candy aisle–Pollo lollipops, anyone?) and authentic Mexican at the Tres Reyes food truck stationed at the car repair place in the old Shell station on Union and 21st.

Go vote for the CD.