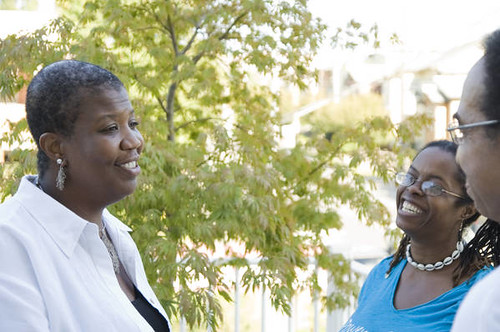 Kumani Gantt has resigned as Executive Director of CD Forum, the organization announced. The resignation comes just before the start of the 2011-12, which kicks off with an exhibition at MOHAI that opens September 29.

Gantt joined the organization in 2009, succeeding director and founder Stephanie Ellis-Smith. When she was hired, one of her goals was to reach out to local teens to get them involved with the Forum’s programs, she told CDN in 2009.

More on her departure, from CD Forum:

CD Forum Board President Mark Griffin noted that, though the organization and Gantt have decided to part ways, the departure is amicable and the board is tremendously grateful for Gantt’s generous efforts in sustaining and promoting CD Forum for the past two seasons.  Gantt will be pursuing her artistic goals in theater and the literary arts.

“We are very appreciative of Kumani’s hard work and service to CD Forum. She is a great ambassador for the arts and we wish her the best in her future pursuits,” said Griffin. “I have no doubt that Kumani will continue to make significant contributions to the arts community.”

Griffin also noted that the board is re-examining the organizational structure of CD Forum and may reconfigure the duties of the executive director before hiring Gantt’s replacement. The organization is expected to begin its executive director search this November and hope to hire a head by spring. Griffin and the rest of the board’s executive committee will provide oversight while the Board conducts a search for a new director. An Interim Operations Manager will also be brought in during the transition.

The Central District Forum for Arts & Ideas kicks off the season with a panel discussion about the 1961 Freedom Rides that were pivotal in the national Civil Rights Movement. The September 29 talk will be offered in conjunction with the traveling exhibit Freedom Riders that will be at MOHAI September 26 through October 24.

Here are some season highlights, from the CD Forum press release:

Pulitzer Prize-winning author Isabel Wilkerson reads from her award-winning masterwork, The Warmth of Other Suns, which chronicles one of the great untold stories of American history: the decades-long migration of black citizens who fled the South for northern and western cities, in search of a better life.

If anyone knows how to get funky, if not downright scandalous, it is Hazelle Goodman.  With feature films and an HBO Comedy Special under her belt, Hazelle packs a comedic punch as she bobs and weaves through some serious, but always hilarious commentary about our times.

The CD Forum’s CREATION Project artists always push the boundaries of aesthetic form and content. This year’s showcase will feature our two selected artists, as well as a work directed by our project mentor, Valerie Curtis-Newton, artistic director of the Hansberry project.

Created by artist Mark Bamuthi Joseph, red, black, and GREEN: a blues is a full-length, multimedia performance designed to jumpstart a conversation about environmental justice, social ecology and collective responsibility in the climate change era.  Joseph last appeared in Seattle in 2009 with his critically-acclaimed work, the break/s.