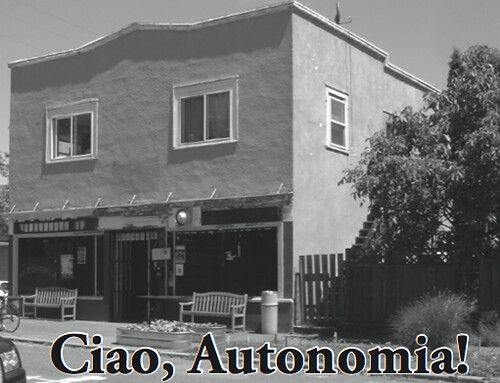 Autonomia, a non-profit radical social center at 24th and Lane, has closed after relations with some neighbors frayed and the city stepped in to shut down it’s allegedly unpermitted parties.

The collective behind Autonomia has not yet released a statement on the house’s closure, and we have contacted the house to learn more.

The Department of Planning and Development cited Autonomia in June for operating as a nightclub, which is not a permitted use for the space. It was only permitted to be a market or residential apartments. Jonah at Publicola reports that DPD never received requests for such permits after the space was cited for violations.

An anonymous story in Issue 6 of Tides of Flame, a self-described anarchist paper in Seattle, mourns the loss of the house and has some choice words for the neighbors of Autonomia (the full story has also been posted on the Puget Sound Anarchists website):

Thanks to its rich, whiny neighbors, the Autonomia Social Center at 600 24th Ave S. in the Central District is closing after only 9 months. Evidently this mighty little bastion of freedom was too much for these assholes, who could not abide a bit of street-life on an otherwise empty corner. A little music a few nights per week and a well-tended sidewalk garden? Not for these gentrifying scum-bags.

Anyway, thanks to these party-pooping shitheads, the Department of Planning and Development put a stop to the music, thus starving Autonomia of potential income. Neighbors like these are the types that regularly attend community meetings with police, slobbering on their handcuffs and offering tips on which neighborhood kids they think possibly maybe could be selling drugs on the corner based on their, you know, manner of dress and slang and stuff. They cringe at graffiti and all other signs of disorder. They use their money and their friendly relationships with cops to sanitize their surroundings. You know, “those” kind of people.