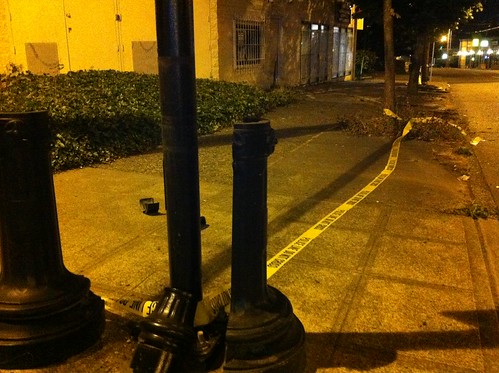 UPDATE x2: The initial report from SPD contradicted our original story that the shots were fired near Pine. However, after talking with SPD, they determined they made an error and corrected their post.

Police responding to the call chased the suspects until the suspect vehicle crashed into a building at 12th and Boren. The suspects were arrested.

Judging by wreckage at the scene, the suspect vehicle appears to have struck a lamp post before running to the door of Lami Nail Supply.

From SPD (revised to fix error):

On August 25th at approximately 11:08 p.m. officers responded to a call of shots fired near 12th Avenue and Boren Avenue.  Preliminary investigation indicates that the two involved vehicles were originally coming from the Seattle Center.  The suspect vehicle, a white Cadillac, was occupied by two adult males.  The victim vehicle, a Dodge pickup truck, was occupied by two males and a female.  The suspects began driving aggressively toward the victims and at some point near 12th Avenue and Boren Avenue pulled alongside the victim’s truck and fired a handgun at the victims.  The victims themselves were not struck by the gunfire but their vehicle was.  The victims were able to evade the suspects and get away from them.  None of the victims were injured.

Patrol, K-9, and SWAT officers along with Gang Unit detectives conducted an area search for the outstanding suspect.  The second suspect was eventually located in the area of the 1200 block of South Main Street and taken into custody.

Both suspects were transported to Harborview Medical Center via ambulance for treatment of non-life-threatening injuries sustained in their vehicle collision.

Both suspects are under hospital guard and will be booked into the King County Jail upon their release.  Booking charges are still being determined by investigating officers and detectives.

Officers observed a handgun inside the severely damaged suspect vehicle, which was impounded and taken to the evidence garage for processing.

This remains an active and on-going Gang Unit investigation.

A police chase ended in a wreck at Boren and Yesler late in the night of August 25 after shots were fired on Capitol Hill. The shooting occurred near Pine and Boren after a dispute between people in two vehicles, Seattle Crime reports. Police chased the suspects down Boren, where the suspects crashed into a building near Boren and Yesler. Two suspects were arrested.

Around 11:30 p.m., two men in a vehicle got into a dispute with a man and a woman in another car.

One of the two men then opened fire on the couple near Boren and Pine.

According to a police source, the suspects were “driving down street shooting off rounds.”

We’re working to find out whether the victims were injured.

Officers responding to the shooting spotted the suspects’ vehicle and chased them until the suspects crashed into a building near Yesler and Boren.

Officers immediately took one suspect into custody and set up a perimeter in the area as they searched for the second man with a K-9 unit. He was arrested a short time later. 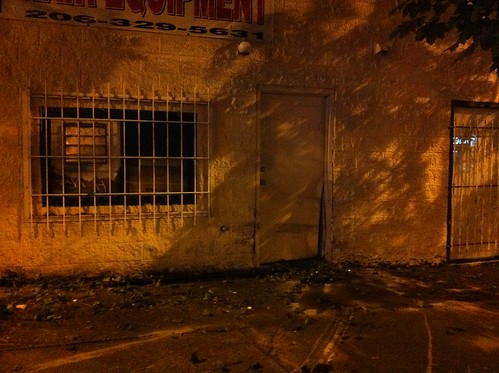