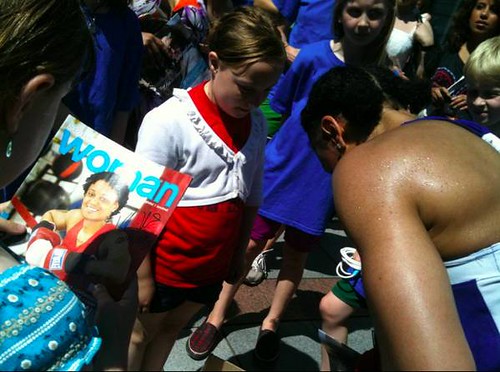 Citing a lack of funds, the Queen Team based out of Cappy’s Boxing Gym has called it quits. After months of training that helped lead the Queen to her fifth National Championship in a row in June, the Queen has decided to train with Tacoma Boxing Club instead of Cappy’s at 22nd and Union.

Wow!  It has been an amazing 6 months since the Queen Team was  launched.  Without all of your support and money, we couldn’t have accomplished such Historic Goals.  We got our Boxer qualified for the Pan American Games, the U.S. Olympic Trial Box-offs and her 5th National Championship.

It is now the 7th month and we will be closing down the Queen Team.  We are out of money and cannot continue to operate without funding.  Upon Queen’s return from Nationals, we offered a training proposal that Queen turned down.  She has opted instead to train with Tacoma Boxing Club.

Thank you for all your hard work and commitment to this team and Queen’s goals.  You can stay in touch with Queen as she works her way to the gold via e-mail.  [email protected]

We wish the Garfield alumna much luck on her journey to the London games. Good work, Cappy’s and all the area businesses that did what they could to help her get where she is. We’ll definitely keep following her as she tries to be one of the first women ever to win an Olympic medal for boxing.