The group conducting a city-wide district energy pre-feasibility study has recommended Yesler Terrace and First Hill as the neighborhood with the most potential for such a system. The combination of an existing system serving the hospitals and the opportunity associated with a large-scale redevelopment of Yesler Terrace bumped the neighborhood to the top of the list of viable opportunities for the modern, energy-saving idea.

At its core, a district energy system consists of a series of underground pipes carrying energy, typically in the form of steam or hot water, that buildings can pull from for their heating needs. Larger systems, such as in downtown, produce energy through more traditional methods, like burning natural gas or, more recently, biomass. Seattle Steam has been heating buildings downtown for over 100 years, and currently heats around 200 buildings including Seattle University, Swedish Hospital, Virginia Mason and Harborview.

The modern district energy systems the city is looking at would likely be hot water systems instead of steam. Using hot water would allow the system to draw from a more diverse array of energy-production methods. In order to work with the existing Seattle Steam system on First Hill, the old system will need to be modernized. But once the system is in place, the ability to reduce dependence on oil (or, as is common in Seattle, electricity) can be huge. 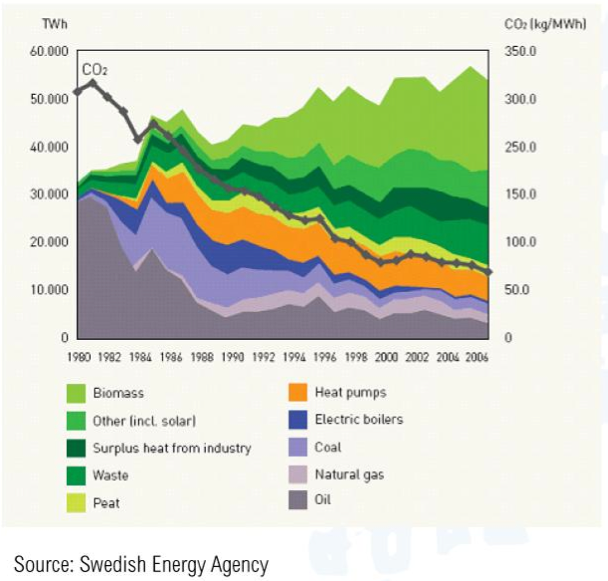 As this Swedish system expanded, dependence on oil went down. From a presentation to the City Council

District energy is not completely new to Yesler Terrace. The neighborhood’s historic steam plant was recently saved by a $3.1 million grant form the federal government to rehab it and turn it into an early childhood education and adult training facility. There are no plans, it seems, to turn it back into a power generating facility.

The proposed arrangement would involve Seattle Steam as the wholesale energy provider, then a new retail provider would be selected to run the neighborhood system. The city’s would be a partner in some way with this retail provider and take the initiative to facilitate creation of the system. Here’s a flowchart outlining the potential system structure:

Other neighborhoods that show promise for district energy are Capitol Hill (especially near the upcoming light rail station), South Lake Union and the University of Washington.

Here’s the presentation given to the City Council earlier this week:

Watch the presentation (begins around 29:00):