King County has put some teeth in its messaging about the dire condition of Metro’s budget by releasing a model of how a 17% cutback of service would impact 80% of the routes it serves. Example cuts include the elimination of route 84 between Madison Park and MLK. A public meeting next week will be held to discuss the budget woes, the service cuts and to gather public comment. Details on that and how to provide your feedback on the situation, below.

On the table for King County is the proposed implementation of a new $20 car tab fee called the Congestion Reduction Charge. Without the charge, Metro says service cuts could begin as early as this winter. Seattle Transit Blog has rounded-up its posts on the topic here. If the King County Council doesn’t pass direct implementation of the new fee this summer, it’s likely the proposal will end up on the fall ballot. 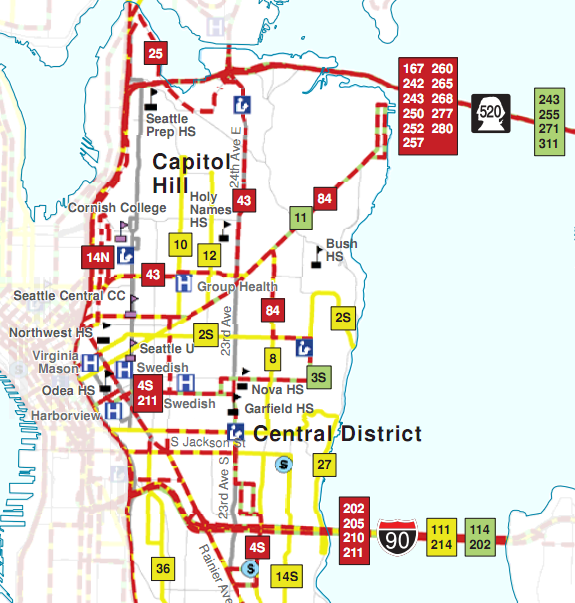 Details on the Tuesday, July 12th Seattle meeting are below. You can also provide public testimony via this online form. This King County provided map shows how cuts would play out in the Capitol Hill and Central District area of the city.

Due to the dramatic recession-driven drop in sales tax revenues, Metro Transit is facing a
$60 million annual deficit between revenues and the cost of providing current levels of transit
service. To close this budget shortfall, King County has a choice of cutting 17 percent of transit
service—taking the system back to 1996 service levels—or preserving current service levels by
enacting a $20 congestion reduction charge on vehicles in King County.

The Metropolitan King County Council’s Transportation, Economy and Environment Committee will
host three special evening hearings to hear public testimony on the proposed transit service reduction
and the Metro Transit budget crisis. These meetings are an opportunity for you to learn about the
proposals and weigh in on the future of Metro transit.

The meetings will be held in Kirkland, Seattle and Burien:

In the past two years, Metro Transit has transformed its operations to hold off these cuts and wrench every available dollar out of the agency for service, including:- Achieving new scheduling efficiencies;
– Eliminating more than 100 staff positions;
– Deferring planned service expansion;
– Reducing operating reserves, and
– Reducing its capital program.

80 percent. Metro’s employees were also part of the solution: negotiating cost-cutting labor agreements that will reduce Metro’s costs by $17 million per year.

Despite these fare increases, budget reductions, and operational efficiencies, it is not enough to cover the anticipated shortfall and we are now nearly out of tools to save our system. The savings and efficiencies created by Metro over the past few years save approximately $147 million per year, but the drop in sales tax revenues means Metro still faces an operating shortfall of $60 million a year each year from 2012 through 2015.

The State Legislature has authorized a tool that is available to King County to help maintain Metro service at its current level: a temporary $20 Congestion Reduction Charge on vehicle licenses for a two–year period ending in mid-2014. County Executive Constantine has sent that proposal to the County Council as well as two other pieces of legislation:
– An ordinance approving a Congestion Reduction Plan, a prerequisite for Council action on a   Congestion Reduction Charge, and
– An ordinance cutting 100,000 hours of Metro bus service effective February 2012 and directing
Metro to plan for reducing bus service by an additional 500,000 service hours in the 2012-2013   budget.

Metro Transit service is critical to the economy of King County, providing approximately 110 million rides annually, taking hundreds of thousands of cars off the road each day, and helping people get to and from some of the largest employment and activity centers in our state. More information about Metro’s financial crisis and the Congestion Reduction Charge is available on the King County website http://www.kingcounty.gov/exec/news/release/2011/June/20Metro.aspx