While investigating a narcotics call in Lavizzo Park July 6, SPD officers recognized a suspect in a North Seattle robbery. The suspect was arrested.

On July 6th, at approximately 8:20 PM, East Precinct officers were investigating a narcotics complaint at Lavizzo Park (2100 South Jackson Street), when one of the officers recognized a person inside the park as a wanted robbery suspect from an earlier Wanted Bulletin. The robbery occurred on July 4th, in North Seattle.   The suspect, a 42 year old female, was arrested and transported to the Robbery Unit where she was interviewed by detectives.  The suspect was later booked into the King County Jail on Investigation of Robbery.

In another report, SPD describes an armed robbery that started at MLK and Cherry:

On July 7th at 12:35 a.m., East Precinct patrol officers responded to a report of a robbery in the 2300 block of Cherry.  The victims, a 29 year old man, a 24 year old woman and an 11 year old boy told officers the following.  The man and the boy had driven to Martin Luther King Jr Way and East Cherry Street to pick up their family member, the 24 year old woman, who was waiting for them.  When they arrived, they saw that the woman was in the company of a 46 year old man, the suspect.  As the woman was getting in the car, the suspect told the family, among other things, that “he was strapped (armed), he was down here keeping her safe (the woman victim) and that he needed to get paid.”  The man showed the suspect an empty wallet, so the suspect got into the car and ordered the victims to drive him to an ATM.  Together, the four drove to one ATM but the victim’s card wouldn’t work.  They then drove to another ATM and the man withdrew $20, which he gave to the suspect.  The suspect then ordered the man to drop him off at 23rd and Cherry.  The suspect got out of the car and began walking eastbound on Cherry Street.  The victims immediately called 911.  Officers contacted the suspect one block away and arrested him without incident.

Although officers didn’t find a weapon on the suspect, they did locate 2.5 grams of suspected crack cocaine.  The suspect also had a warrant for his arrest.  The suspect was booked into King County Jail for Investigation of Robbery, VUCSA (narcotics) and Kidnapping in addition to the existing warrant.

And, in one more crime report, a couple of attempted burglars were spotted petting their victim’s neighbor’s pit bull July 1 near Madison and 20th, according to the police report: 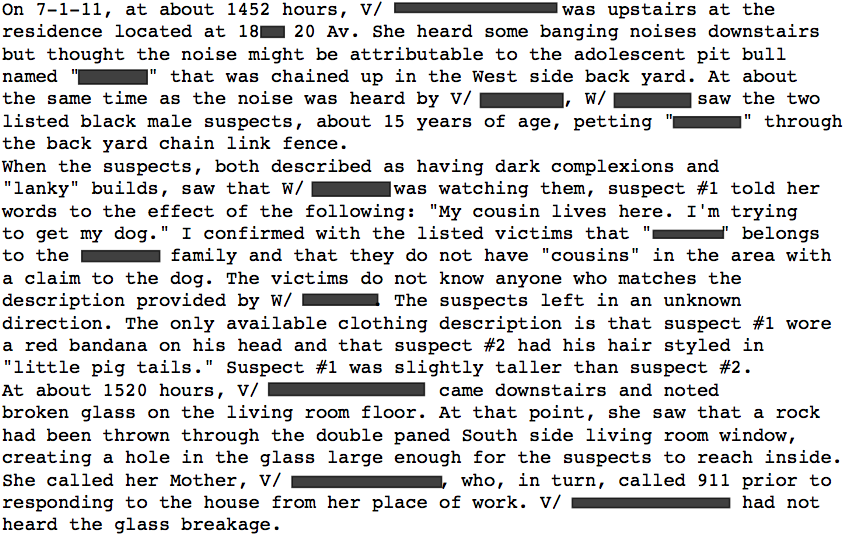 The suspects were not able to gain entry after damaging a window and a door. Nothing was noted as stolen.