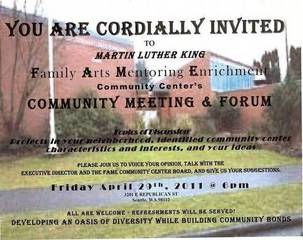 The State Auditor will release a report later this month looking into possible conflicts of interest behind the decision to sell the MLK Elementary school campus to the First African Methodist Episcopal Church, the Seattle Times reports:

When an affluent private school in Madison Valley offered to pay as much as $9.7 million for an empty public school in 2009, the choice for the cash-strapped Seattle school district seemed obvious: Sign the papers.

But what could have been a straightforward real-estate deal turned into an elaborate chess game that ended with a well-connected church buying the closed Martin Luther King Elementary School with $2.4 million in taxpayer dollars. more…

Issues around the deal have been surfaced on the Save Seattle Schools Community blog and in CDN comments since it was approved 5-2 in an October school board vote.

While the $9.7 million figure represents the calculated valued from a long-term lease the Bush School proposed in its bid for the property, the private school did make the largest cash bid in the process at $3.75 million, CDN reported when it documented the four competing projects for the campus back in fall 2009. But dollars weren’t the only factor in making the decision as community use of the space was also weighed. Now, the Times says, state investigators are looking at the transaction to see if these other factors represented violations of the law.

The Times also casts a skeptical eye on the AME’s efforts to date to put the campus to use:

Today, seven months after the School Board’s vote, First AME has one tenant lined up for the building — the church’s Head Start administrative offices — and no firm plans for its promised youth services beyond a two-month summer day-care program run by another agency. A church leader also said groups can book the gym as long as they provide supervision.

Church leaders recently hedged on making the playground accessible to neighborhood children — a requirement from the city when it changed the property’s use permit. The church said it has liability concerns about someone getting hurt there.

AME held a public meeting at the end for April to “discuss projects in your neighborhood, identified community center characteristics and interests, and your ideas,” according to the event flier.

“We’re going to talk briefly to the community about what we had submitted and get from them what they would like to see in terms of the community center,” said Norward Brooks from First AME, who described the event as a meet-and-greet. “I hope that we can get more of the community involved in having the center operate because it is a center for the people in that community.”