It was a busy weekend in the neighborhood, and we could not have asked for a better day for a garden tour. When I checked in with Central District Garden Tour planner Jean Tinnea around 2 p.m. Saturday, they had run out of maps and estimated that over 1,000 people had shown up for the tour.

The tour featured private backyard gardens, public green spaces and the gardens of community organizations. Participants were given maps with fourteen destinations marked. Most were between Union and Jackson, but there were a handful in Madison Valley. 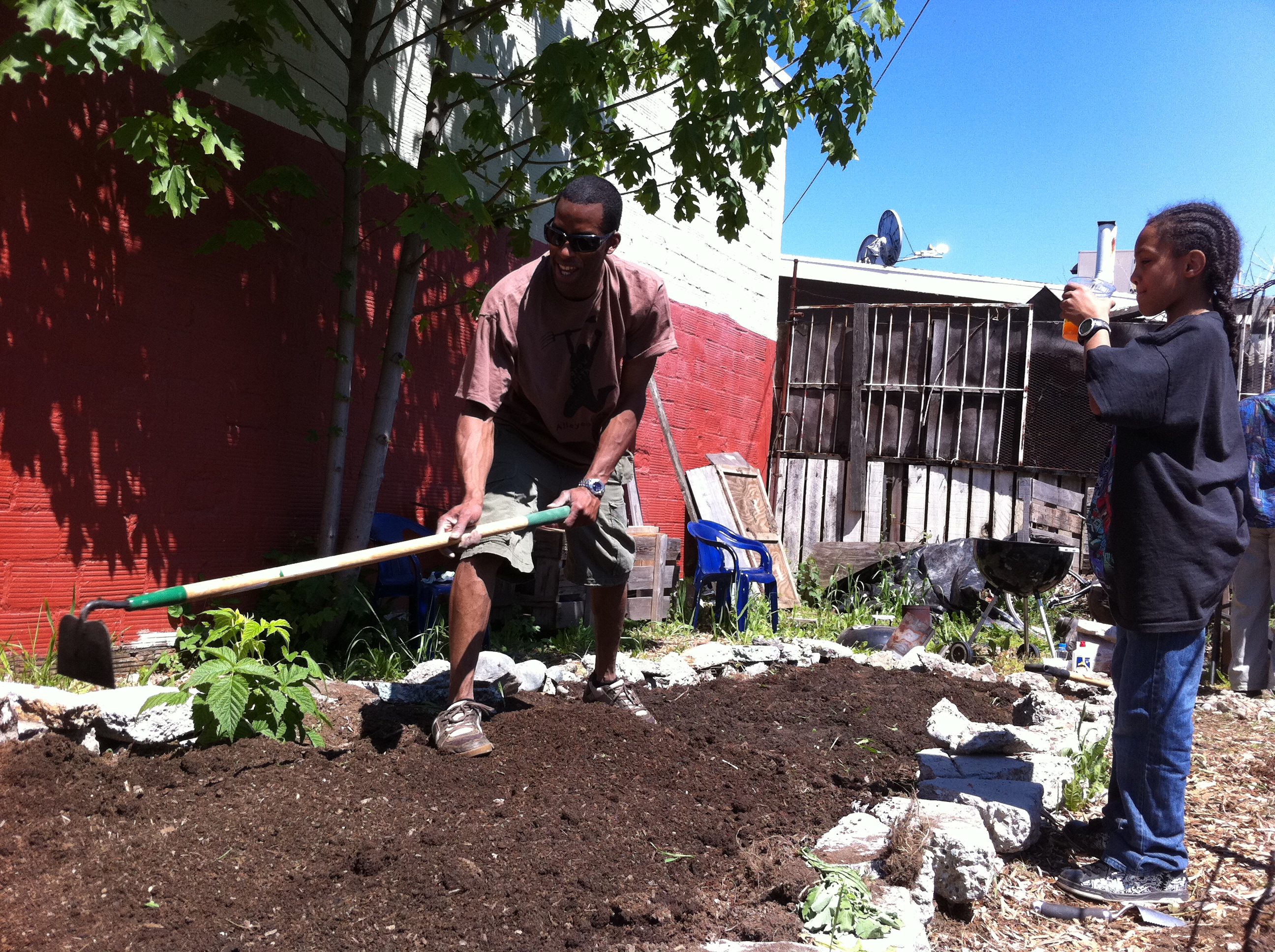 The Alleycat Acres farm at 21st and Union was the first stop on the tour. They were also holding a community potluck and barbecue, and folks were out working on the farm throughout the day. 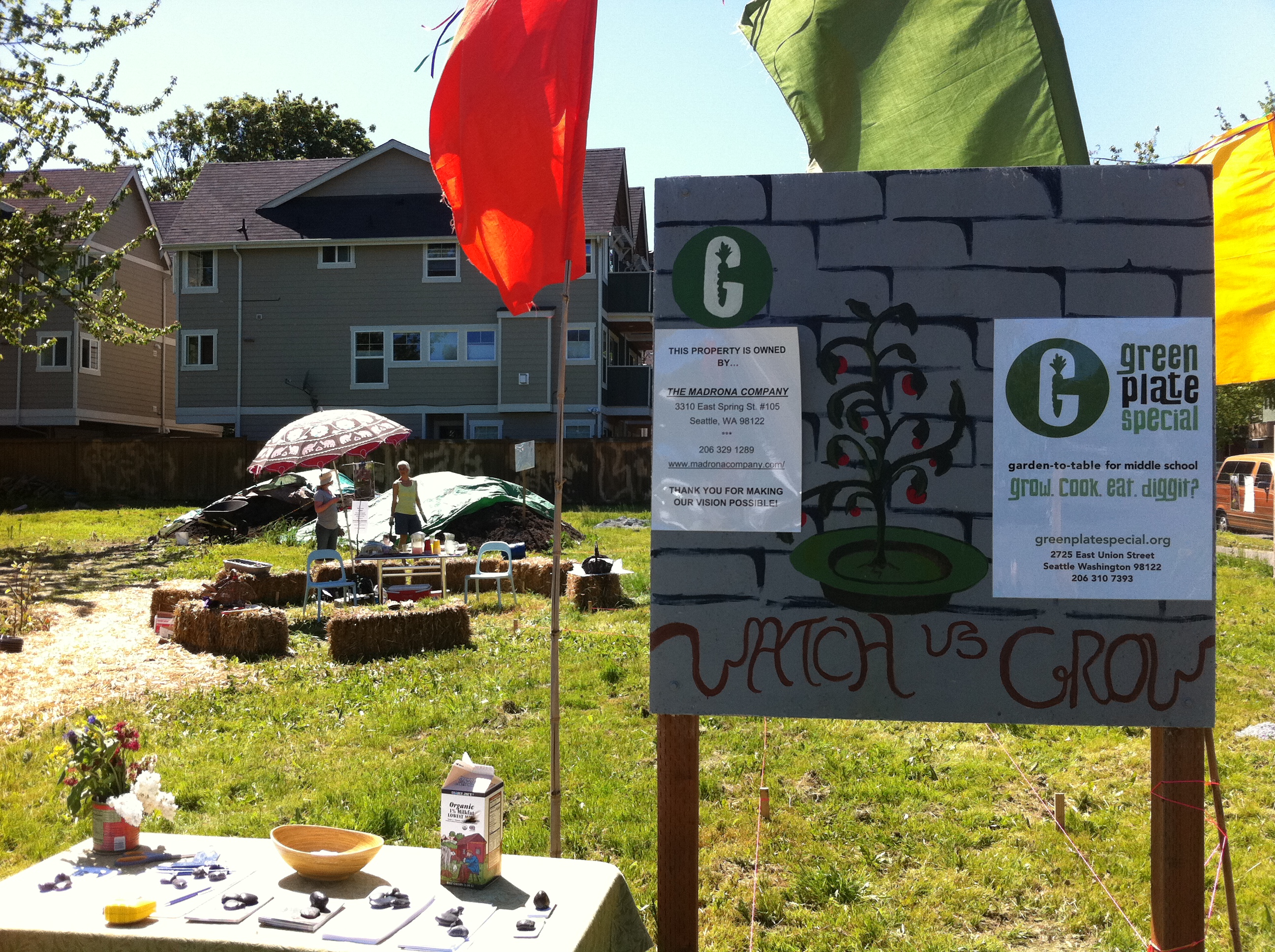 Just down Union at MLK, Green Plate Special was showing off the space their garden and teaching indoor kitchen will call home for the next three years (see our previous story). 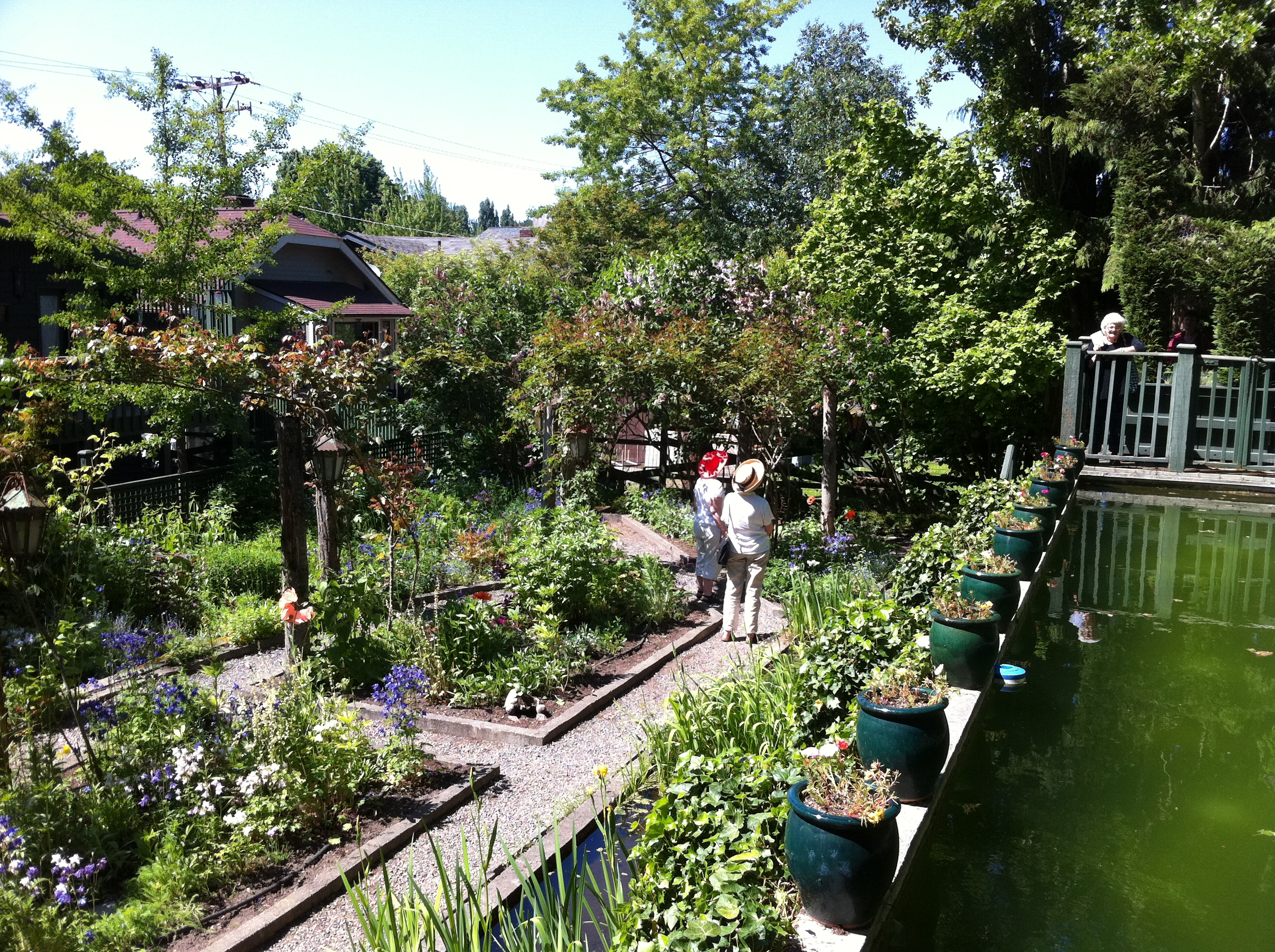 The Wyman Garden in Madison Valley was an anticipated highlight of the tour after it was featured in the Seattle Times last month. 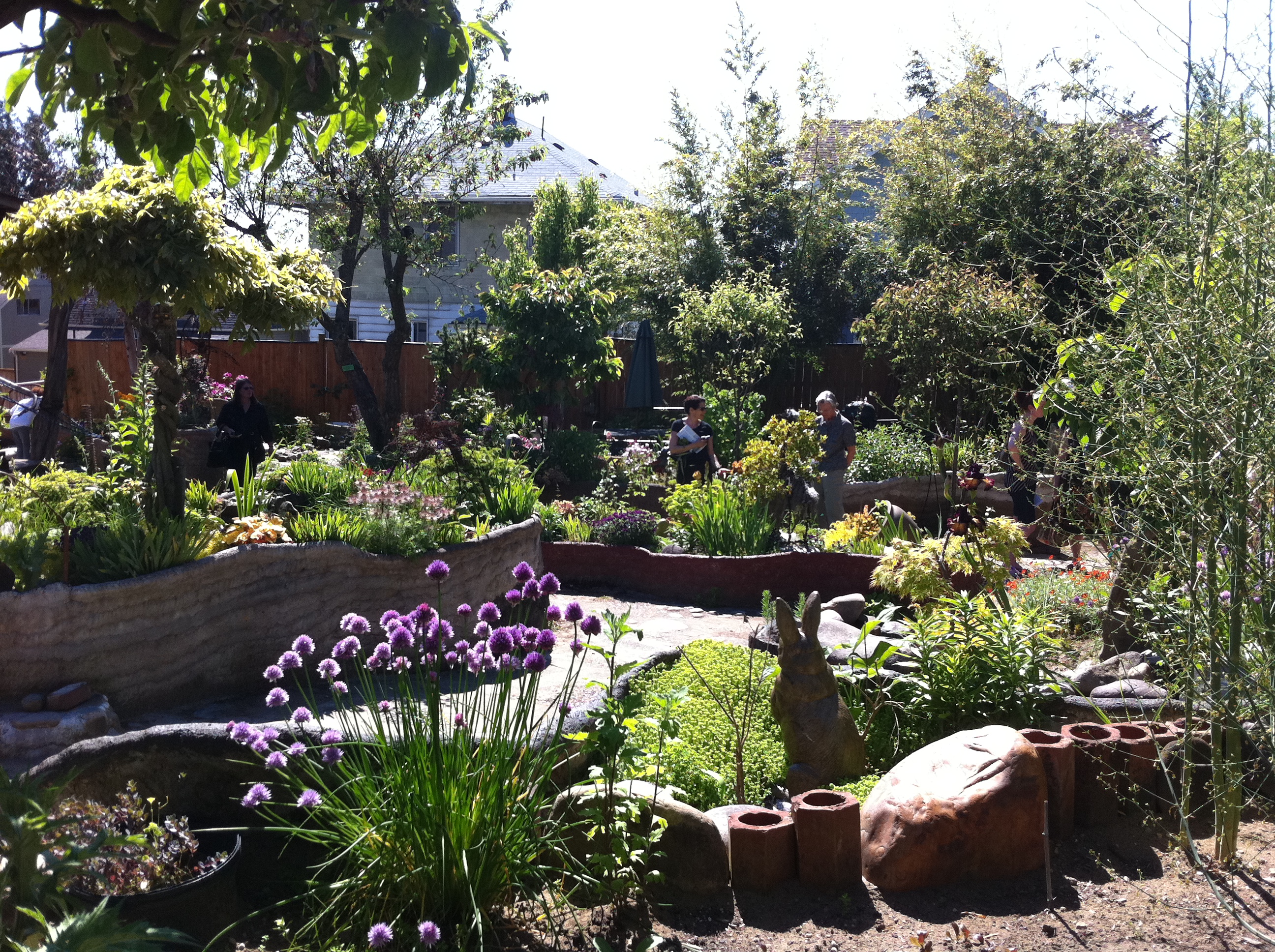 Cyrazynska’s Cement Folly in Leschi was another highlight. The handmade stone and mosaic work gives the garden it’s shape. From the gardener’s description in the tour map: “Influenced by my exploration of gardens and people of the world, my aim was permanent beauty a la Gaudi and Niki de St. Phalle recycled into low-maintenance browse-ability. I wanted to use whatever was discarded in the hood’s many changes, lots of cyclone fence and water pipe to begin with, thus my invented retaining walls.” 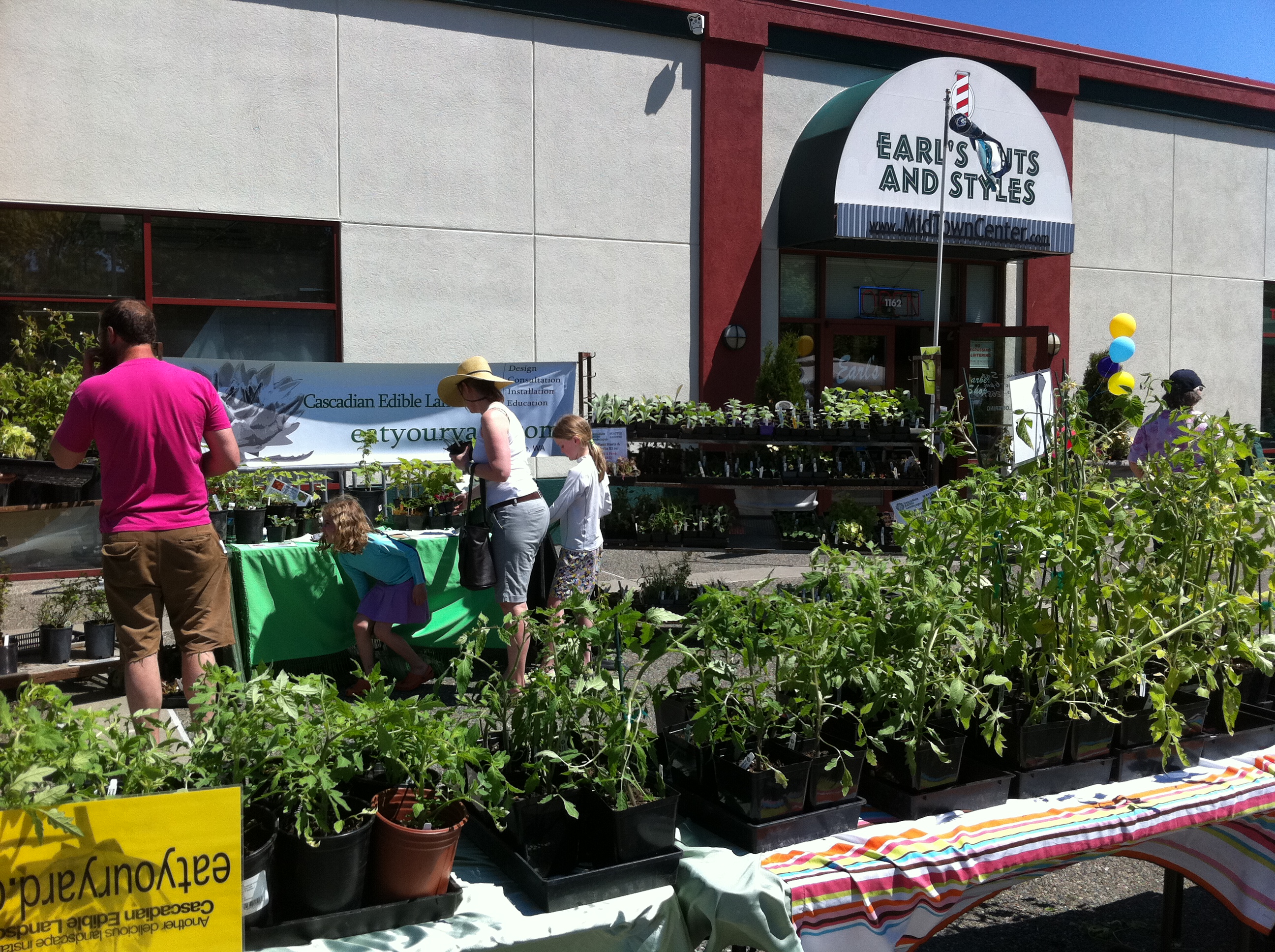 Apparently, people were inspired to start their own gardens. Cascadian Edible Landscapes sold almost $900 worth of plants at their stand set up at 23rd and Union, the bake sale raised $313 and Garden Tour planners are still tallying up the funds raised through ticket sales.

“We sincerely hope we have raised enough to build at least one kiosk at a CD location TBD,” said Tinnea in an email. The funds raised by the Tour will help fund the CD Public Art Project, which has been holding community meetings (“charettes”) to gather ideas for public art projects in the neighborhood. “Kiosks got the most votes at the third charette for the first CD Art Project to actually build.”

A big lesson I took from the tour was about how powerful an impact community members can have on the neighborhood when they help actualize the spaces we have. Visiting the UmojaFest PEACE Center garden at 24th and Spring, you see how a positively-focused group can radically change a troubled corner into a space that encourages artistic expression, education and personal health. Alleycat Acres and Green Plate Special have turned vacant lots not just into gardens, but also community education opportunities. Even just having all the activity and plant sales in the plaza space in front of the Midtown Center at 23rd and Union helped give the whole corner a more actualized and lively feeling.

It makes me wish we could have the Garden Tour every day (though I’m sure the hosts would get tired of people walking through their backyards all day).