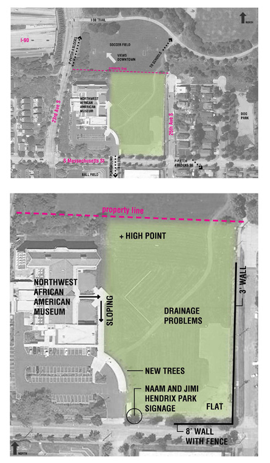 The community will get its first look at three design proposals for the planned Jimi Hendrix Park as the concepts are unveiled at 6:30 PM Thursday at the Northwest African American Museum, 2300 S. Massachusetts St.

A final design will be presented at a community meeting in August.

Architects Murase Associates produced the designs following a May community meeting where feedback — and inspiration — was gathered.

The firm has said the park may include some of the following features:

Murase’s page on the design also notes that a performance space is being considered for the park. “The park may also feature a performance space dedicated to showcasing the talents of local artists and musicians.” In the past planning involving Seattle Parks, noise concerns were raised as a significant issue for people living nearby the 5.8 acre park space.

In the meantime, the Jimi Hendrix Park Foundation continues to raise funds to pay for the park’s development and construction. The park has already secured hundreds of thousands of dollars in funding, including $500,000 from the Parks and Green Space 2008 Levy Opportunity Fund, $70,000 from a Neighborhood Matching Fund and a $20,000 donation from Janie L. Hendrix. The estimated cost for the project is $2 million, according to their website. 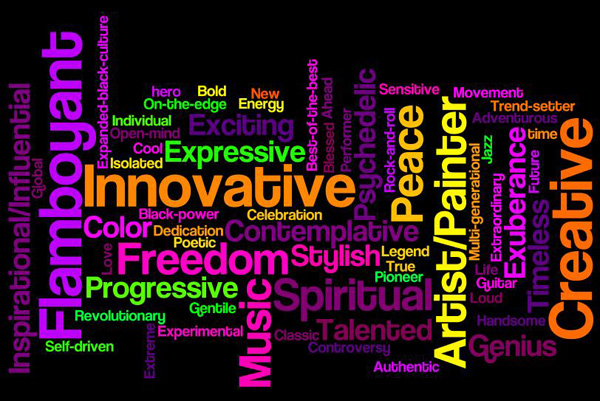 The design team posted this ‘Wordle’ showing some of the adjectives used by community members to describe Hendrix. Word size represents frequency in the feedback collected.