Kristen O’Donnell had just returned from a trip to Vancouver, BC, before meeting me outside the aging Yesler Terrace Neighborhood House at Broadway and Yesler Way. Though the building is old, built in the 1940s along with much of the neighborhood, it was getting heavy use. A mother holding her young daughter’s hand left a gathering inside the building, both of them wearing big smiles and waving at us. 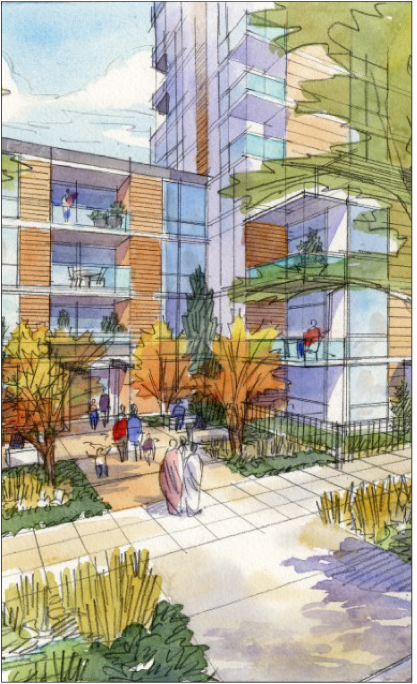 “Another Head Start graduate,” said O’Donnell. But her trip to Vancouver did little to ease her fears of what could happen to her neighborhood if the Seattle Housing Authority’s plan for redevelopment moves forward. She had the opportunity to check out the social housing (the term Vancouver uses for “affordable housing”) project in the Olympic Village development, where the number of affordable units has been slashed in the face of budget problems.

“If that’s the grand vision for our public housing, then yikes,” said O’Donnell. While original promises called for thousands of affordable units to be built if the city landed the Olympics, that number was scaled back to 252, according to the CBC. Now half of those will be rented at market rates to help pay for the massive debt incurred by the project, which went $46 million over budget.

Olympic Village was created in a rush as way of housing athletes for the 2010 Winter Games, whereas the plans for Yesler Terrace are scheduled to roll out over a decade or two. Another way O’Donnell fears the redevelopment could fail is if current housing is vacated or demolished, but the private development that is supposed to fund the replacement housing stalls or fails to come through entirely. Then the neighborhood will simply be left with an empty lot, and more residents will be living off housing vouchers further away from services, easy transit access and the employment opportunities available in the city’s center.

Most of the buildings in Yesler Terrace were built in the 1940s “as a monument of how wonderful the new deal would be,” said O’Donnell. The project was renovated about 30 years ago, and wear-and-tear has taken its toll. The buildings need either a renovation or to be replaced, both of which would be costly options. The SHA’s plan calls for not only replacing the 561 “extremely” low-income units currently available in the neighborhood, but also adding 100 more, as well as 290 “very” low-income units and 850 “workforce” units. Private developers would add 3,200 market-rate units. The SHA will also provide replacement housing for all residents, something O’Donnell gives them credit for.

“As frustrating as they are, they’re probably the best,” she said of the SHA. “They don’t just put people out.” But even if the redevelopment plan goes off without a hitch, O’Donnell does not think it will be as good as the current neighborhood is.

“It’s not going to be a really good social environment for anyone, I don’t think,” she said. “It’s going to take some incredible amenities to replace this,” which she does not see in the current plan. 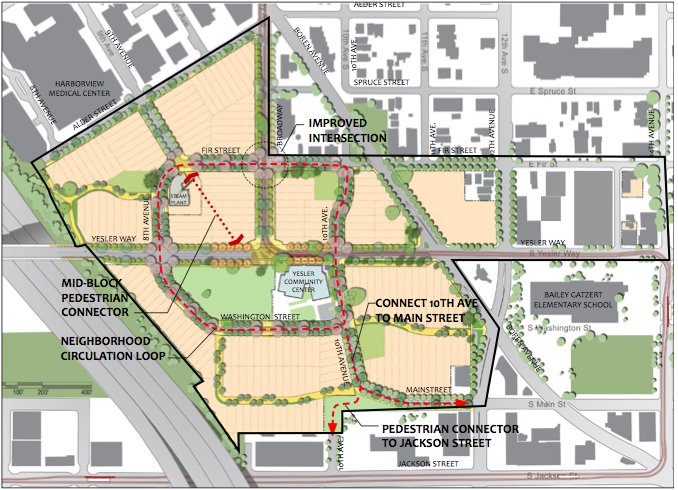 Proposed changes to the street grid

Plans call for reconnecting parts of the street grid and building a new large neighborhood park, office buildings, high-rise market-rate housing and a new retail core at Yesler and Broadway. When the plan is completed in 10-20 years, the neighborhood will be largely unrecognizable aside from the Community Center and the steam plant. Most of the market-rate housing will be in privately-developed high-rise buildings (“can’t-see-down-to-the-waterfront-from-Squire-Park towers,” as O’Donnell called them). The SHA will use the money raised by selling land for private development to build the replacement affordable housing, which will likely be in mid-rise buildings. O’Donnell points out the metaphor that the more wealthy will be “literally looking down on people.”

In part two, we will look at some unique aspects of Yesler Terrace that some residents fear could be lost under the current plan.

0 thoughts on “A new Yesler Terrace, Part 1: What could go wrong”