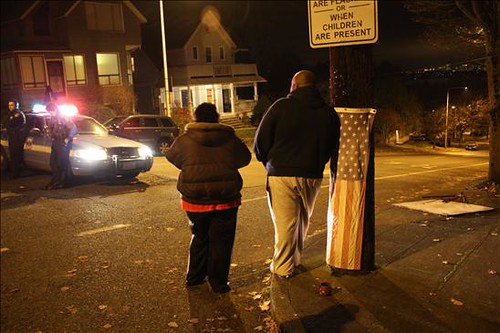 During the manhunt for Maurice Clemmons, the man who killed four Lakewood police officers in November 2009, police surrounded the Leschi home belonging to Clemmons’ aunt after she tipped them off that he was there. Unknown to police, Clemmons escaped the home before they arrived. Officers fired dozens of tear gas canisters into the home, breaking windows and coating everything with a residue. The damage, reports Seattle Times, comes out to $973,858.75:

Eight family members had been living in the house, but the damage was so great the home was no longer livable. It remains uninhabited.

In an agreement finalized last month, the city will pay Chrisceda Clemmons’ family $973,858.75, according to a settlement overview released by the Risk Management Division. About $250,000 of that amount is designated for restoration of the house. The rest is to compensate the family for a host of expenses and losses, including rental payments for transitional housing, lost wages and damage to personal property.

Attaching a value to all that property proved to be a challenge because so many of the items were unique, said Bruce Hori, the city’s director of risk management.

“They weren’t like you could run down to the Guitar Center and buy one,” Hori said. “So getting to a price was not as easy as it would seem.”

0 thoughts on “Times: City to pay nearly $1 million for wrecking home of Clemmons’ aunt during manhunt”