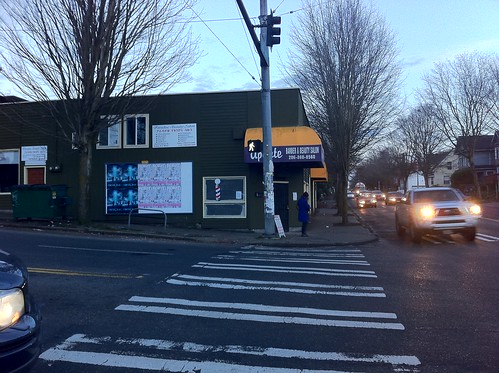 Only yards from an AM/PM mini-mart and service station, a new grocery store is planning to open on the northwest corner of Cherry at 23rd. The Cherry Corner Market and Deli still appears to be in planning and construction phases as owners Samuel Tadesse and Daniel Abahynhe are completing the paperwork required to launch the new business — and get a key liquor license that will allow the market to sell beer and wine.

The corner once housed the Update barber and salon which has now moved two doors north.

Beyond the business factors of operating a market directly across the street from a national quick-e-mart brand, the application to sell liquor bears watching given the store’s proximity to Garfield High School. In December 2008, the Twilight Exit faced opposition from Seattle Public Schools when it sought to move to Cherry from its former home on East Madison. That situation was eventually sorted out after a week of politicking including some campaigning right here on CDN.

As pointed out recently in comments, the Washington State Liquor Control Board has granted other recent liquor applications in the area but we’re following up with the WSLCB. Typically, the state is driven by local community decisions in these applications. We’re checking with the control board and Seattle Schools to see if there are plans for any additonal “good neighbor agreement” requirements for the Cherry Corner Market.

0 thoughts on “New grocery mart coming to 23rd and Cherry”