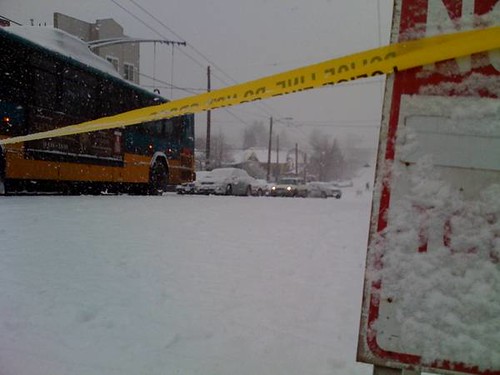 If nothing else, King County Metro seems to have learned from past Seattle weather insanity — like this! — that information is as important as snow chains when it comes to providing public transit service in adverse weather conditions. The agency rolled out a media message this week with a push for everybody to check out some of their new tools for staying informed. The full message from Metro is below. Here are the highlights:

• Sign up to receive Transit Alerts for the routes you use most often;
(www.kingcounty.gov/metro/signup)

• If the weather is bad, check the color-coded status map on Metro Online before you travel;
(www.kingcounty.gov/metro/snow)

Plus, a bonus item not mentioned by Metro but surely loved by Capitol Hill bus geeks — a Metro alert Twitter account:
http://twitter.com/kcmetroalerts

If you want to talk with transit officials about the plan and what has happened on your streets in past storms, the agenda at Wednesday night’s Leschi Community Council meeting will give you the opportunity to learn more about Metro’s plans:

When: Wednesday, November 3, 2010 07:30 PM – 09:00 PM
Where: Central Area Senior Center, 500 30th Ave S, one block south of Jackson
What: Leschi Community Council will present a panel of the key players in city emergencies: SDOT, Metro, City Light, Parks and the Office of Emergency Management. Similar weather patterns are developing which hold the promise or threat of an interesting winter as we had both 2 and 4 years ago. These agencies have been working on an emergency response that hopefully will leave us in better shape to weather those storms. Come find out if you can count on the bus or on power during winter storms; where would go for for shelter?

With forecasts calling for harsh winter weather coming our way, King County Metro Transit is ready to roll out its revised snow operations and customer communications plan. And, as it prepares for snow and ice, Metro is asking bus riders to make their own preparations for winter travel.

“We had most of our improved plans in place last year, but we didn’t get the opportunity to test them because the weather was so mild,” said Metro General Manager Kevin Desmond. “Based on what we’re hearing about this coming winter, it appears we’ll have to put these plans into play and we want our customers to be ready, too.”

Already, more than 10,000 people have signed up for Metro’s popular Transit Alerts, and Desmond would like to see that number double by the end of the year.

Desmond said Metro has a three-pronged approach to operating bus service more reliably when snow and ice begins to affect travel in King County. It starts with preparation, advances into rerouting buses, and finally – under the worst conditions – will significantly reduce service. If that happens, Metro will operate with an Emergency Service Network (ESN) that substantially reduces the number of bus routes and only serves priority streets and highways where cities and other agencies have concentrated their snow clearing activities.

“Two years ago when we had a series of December and January snow storms, we probably tried to provide too much service,” said Desmond. “Our revised plans call for limited service during the worst storms. This may inconvenience some people, but it should help Metro provide safe service that is more reliable and predictable.”

After the 2008-2009 storms, Metro reviewed and revamped all of its snow routes based on plowing agreements with agencies in charge of roads throughout King County, since the buses do not operate well on unplowed plowed streets and highways. Those plowing agreements have been updated again over the past few months.

When snow begins to fall, Metro buses will go to snow routing as necessary given road conditions in a broad geographic area. All bus routes are now assigned into one or more of seven geographic areas within King County. The service status of each area will be color coded and displayed on an online snow map.

Green indicates buses are operating on normal routes; yellow that some – but not all – routes in the area are on snow routes (primarily in higher elevation areas); and red tells you that all bus routes in the entire geographic area are on snow routing. That means your own route may be on snow routing even though roads are bare and wet where you are. It will depend on whether there is snow and ice in other parts of that geographic area.

And, if the weather creates extremely dangerous driving conditions, Metro will reduce service down to the Emergency Service Network with about 70 routes operating on key corridors. The ESN is designed to be reliable in the worst weather or during a prolonged storm period, but customers will be advised to limit travel if possible.

Desmond is urging bus riders to make pre-season preparations of their own.

Start by signing up for Transit Alerts for the bus routes you use most often. If any of those routes begin operating on snow routing – which means some streets and bus stops may be missed – Metro will send an alert to route subscribers. The alerts can be received as email or text messages.

As the weather changes, customers should visit Metro Online before beginning their travel to see what is happening with their route. There is new snow routing in many areas that is different from previous winters, so be sure to check the snow routes for all the routes you use most often.

The best place to get information on transit disruptions is Metro Online’s Alerts Center, or by calling the Customer Information Office. And, when snow is on the way or on the ground, Metro will use Twitter to point followers to the changing information available via the Alerts Center and phone lines.

If possible, check the web first for the most current information. If you don’t have access to the web, call the Customer Information Office at (206) 553-3000. Be prepared for possible long waits on the phone lines because call volumes increase significantly during bad weather even with increased staffing assigned to the Metro call center.

“We’re all in this together, and it’s never easy,” said Desmond. “Metro has done a lot to be better prepared for winter driving conditions, and we hope our customers will do their part to be ready before bad weather hits.”

Here are some basic winter-travel tips for Metro customers:

• Sign up to receive Transit Alerts for the routes you use most often;
(www.kingcounty.gov/metro/signup)

• If the weather is bad, check the color-coded status map on Metro Online before you travel;
(www.kingcounty.gov/metro/snow)

• Be patient. Buses are not always on schedule in snowy or icy conditions. And, increased ridership during bad weather can result in crowded buses and a longer-than-usual wait on the phone for the Customer Information Office (206-553-3000);

• Dress warmly for the walk to the bus stop, expect delays, and wear appropriate footwear for the weather;

• Head for bus stops on main arterials or at major transfer points such as park-and-ride lots, transit centers, or shopping centers; and

• Riders should wait at bus stops at the very top or very bottom of hills, because buses are often unable to stop for passengers on inclines.

0 thoughts on “Metro has plan for the next Snowpocalypse, Leschi Community Council takes a look”