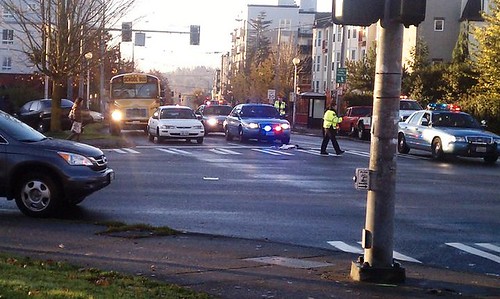 I arrived at my bus stop to see the aftermath of this accident at 23rd and Yesler this morning around 7:45.  Both cars seemed to be involved in a head-on accident, since they were both smashed up in the front.  Both cars were up on the sidewalk on either side of 23rd, and there was some debris in the crosswalk on the south side of the intersection.  Traffic was backed up to Jackson and Martin Luther King as a result.  Must have been some crash!  It seems like there are a lot of bad accidents at this intersection; I wonder why?

0 thoughts on “Accident at 23rd and Yesler snarls morning traffic”