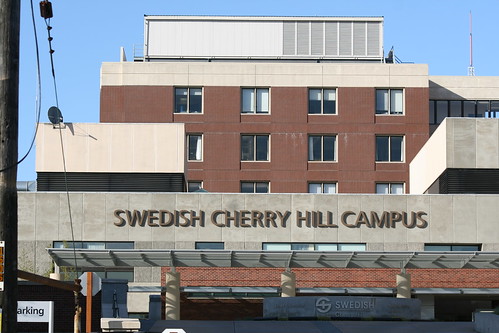 In our three years of covering real-estate issues on CDNews, we can’t ever remember a case where neighborhood residents won an appeal before the city’s hearing examiner.

But that all changed today, when community leaders learned that they’d won their hearing on the controversial proposed expansion of Swedish Hospital east across 18th Avenue.  The low-rise office buildings, between Cherry and Jefferson, would back up against a row of single-family houses.

Appelants made the case that the proposal to put medical offices on that block violated the hospital’s Master Institution Plan, and would require a “major amendment” to that plan before moving forward. That more complicated process would give the community a greater voice to determine the parameters of any expansion, vs. just allowing Swedish to move forward with their plans otherwise.

Quoting from the decision:

Considering this MIMP as a while, and harmonizing all of its provisions, the original intent was that approved development with the greatest bulk, scale and intensity be concetnrated on the central campus block … and significantly reduced at the eastern edge along the half-block abutting residential development on 19th Avenue.

The (Sabey) proposal is not consistent with the original intent of the MIMP.  The bulk, scale and intensity of over 131,000 square feet of medical office and retail space, and parking for 344 vehicles, massed along the entire block on 18th Avenue far exceeds the bulk, scale and intensity of the 48,000 square-foot structure with 30 parking spaces, and the 3,500 share foot structure

Community leaders are speculating that Sabey, the property developer working with the hopital, will likely avoid going through the major amendment process, and will instead just move forward with a completely new plan for their Cherry Hill campus, something that better fits their timeline and was the preferred option for the community from the beginning. That process would include a large amount of neighborhood involvement, and could give Swedish the option of placing the intended medical office buildings on other more central areas of the campus.

Sabey also has the opportunity to appeal the hearing examiner’s decision to Superior Court within the next twenty-one days. However, the outcome of that process is long and uncertain, potentially making it a bad bet for the two companies.