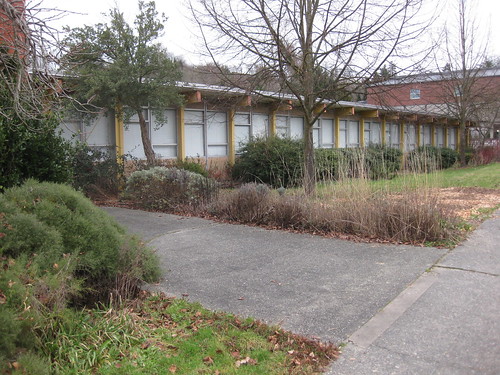 The large audience in yesterday’s school board finance committee meeting had proponents from each of the four groups that have been competing for the right to take over the old Martin Luther King Jr. Elementary building in Madison Valley. With school staff expected to release their recommendation on a choice between the four, some portion of the audience was going to be elated, the others disappointed.

District lawyer Ron English walked the committee through the staff’s analysis of the proposals, and said that three of the four proposals were viable.

District staff came to the conclusion that the only unworkable proposal was CADA’s plan to keep only 33% of the property that contains the school gym and auditorium, leaving the rest for the Bush School to build play fields. Ron English said that they looked at all the possible configurations of soccer fields and determined that there was no way to make the two plans fit together.

From there the decision came down to two questions: revenue to the district vs. value to the community. Here’s how it came out:

The staff recommendation, blessed by Superintendent Goodloe-Johnson, was to accept the proposal from First AME, based mainly on their higher perceived value to the community. First AME also received a lot of credit for the organizational stability and community presence that is derived from their 125 year history in the Central District.

The four school board members in attendance carefully concurred with the recommendation. Kay Smith-Blum said she wished that the district had never surplused the building in the first place, but agreed that “First AME has the strongest benefit to the community”. Peter Maier said he was also comfortable with the recommendation, saying it was “important that it includes a substantial community use benefit in terms of free use of gym and reduced rental rates.”

Adrienne Bailey, Madison Valley resident and leader of the [email protected] group, said that she wasn’t surprised by the outcome, but pledged to fight on. They plan to mount a major lobbying campaign to the full school board in the next month, arguing that the district analysis was flawed and that their plan has the largest total value to the district and community.

Bailey felt especially burned by the issue of rental rates, as her group had done a lot of research and work to put together a financial plan that would be both viable and appropriate for the market. But in the end they were penalized for that as their higher rental rate of $7-$12 per square foot was higher than the $6 per square foot that was pledged by First AME.

State Senator Adam Kline worked with both [email protected] and FIrst AME back at the beginning of this process to try and get them to submit a combined bid. But a deal could not be reached, and the two organizations gave separate bids to the district. When asked whether [email protected] thought they could work together with First AME if they end up getting the building, community members said it was possible, but may be difficult given conflicting priorities between the two groups.