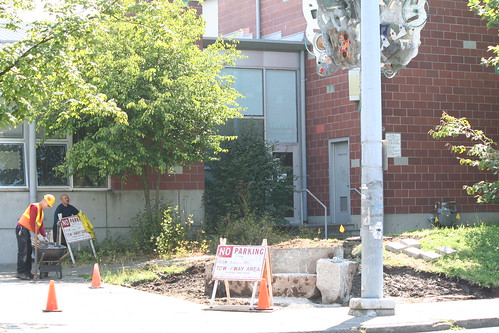 We may have cracked a recent riddle. Two weeks ago we mentioned the stone seating area that mysteriously appeared next to the Garfield Community Center at 23rd & Cherry. Parks HQ didn’t know anything about it, and the staff in the community center were in the dark as well.

But we spoke to a groundskeeper who was working on the project, who explained that it was very much a bottom-up project. He was asked to do something to spruce up the corner there, and the stone was on hand to help out. But instead of creating an abstract sculpture or pile of rocks, he decided to create a community space with an informal seating area.

He said his idea was to create a useful, recognizable landmark, where people could say things like “I’ll meet you at the stone sofa.”

We just think it’s kinda nice to see a fun city project that didn’t involve a ton of meetings, process, and expense.