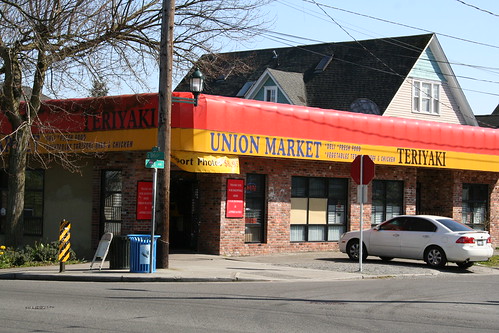 Last night CHS was on the story of a police stand-off at 19th & Howell where a man was arrested following an armed robbery of the Union Market store at 21st & E. Union.

According to Seattle Police, the robbery occurred at 7:40pm, when two men entered the store and robbed the clerk at gunpoint. An officer saw a man matching the suspect’s description running nearby, and followed him to a building in the 1800 block of E. Howell.

Police surrounded the building and eventually the suspect and other occupants came out, and the 21 year old suspect was arrested and booked into King County Jail. The second suspect escaped.

CDNews Twitter friend LizWas spotted crime tape and police activity at the market a few hours after the robbery.