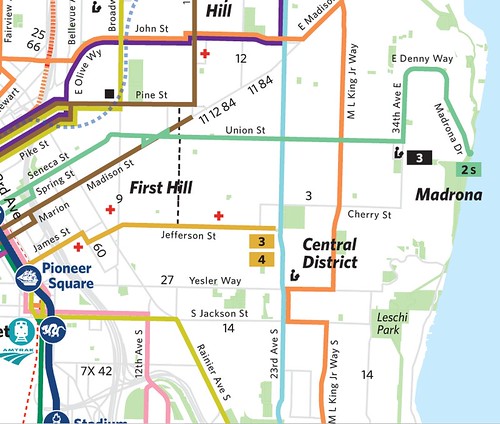 Today the guys at Seattle Transit Blog released an awesome map that shows bus routes based on their frequency. Routes that run at least every 20 minutes get big colorful lines. Those that run only part of the day or less often get little skinny gray ones.

We should be thankful for our good bus service, but also realize it exists for a reason: because we’ve got a large population that are heavy users of transit. Get on the #3 or #4 on any given day an it’s likely to be standing room only by the time you reach Broadway. It’s the same for the #48, and the #8 has been doing very well too since its frequencies were increased earlier in the year.

But our problem going forward is that those frequent bus routes are apparently all that we’re ever going to have. They are currently at capacity, especially on the slow, crowded routes that have to forge through bad hospital traffic and steep hills as they approach downtown. You often see buses bunching up on the #48 route too, indicating it is nearing its maximum productive capacity.

It made total sense for the region to put a priority on connecting UW, Capitol Hill, and downtown with light rail. It’s an expensive project, but those 3.4 miles of track are going to immediately carry tens of thousands of people on transit, in a fraction of the time it used to take on the bus. It’s no mystery why, since those destinations already have a high density of people who use transit, and who have lifestyles and outlooks that make transit use natural, even when the current solutions are slow, crowded, and inconvenient. High existing performance is the best indicator that it makes sense to invest in an infrastructure upgrade.

But for some reason during the last 10 years, the city’s next priority for mass transit development has been two areas that don’t rank highly in terms of existing transit density and ridership. The Central District has 3 routes in the top ten county-wide when ranked by ridership, and five routes in the top 25. West Seattle’s busiest route, the #54, ranks at 41st on the list. That’s an existing, high-frequency route that is far from a top performer in terms of ridership.

Ballard fares a bit better, with the #15 route ranking 11th, and the #44 at 14th place. But that’s still significantly less existing transit demand that what we see in the Central District.

The CD would score even higher if you used a metric of passengers per mile, as we’re so much closer to our major destinations than either of the west-side neighborhoods. That indicates that you could get more bang for your buck here than in the other options.

This is why we think it is so important for the city to develop a new, comprehensive transit master plan. We need a plan for the whole city that prioritizes future transit funding by hard, objective metrics such as ridership, cost, and travel efficiency. We need to take the decision out of the hands of the at-large city council, which often favors projects based on the area where they reside, a factor that gives unusual weighting to a few select neighborhoods.

It is good to see the city council moving forward on that. But it’s key that they don’t prejudice the outcome of that process by insisting that any previously conceived projects remain at the top of the list. And it’s important that the funding scheme not rely only on the ability of a given transit service area to support high property taxes, something that is certain to restrict improved transit to only wealthy and commercialized areas.

To be clear, we’re not asking for a personalized subway from 23rd & Cherry to downtown and the UW. We’re asking for some rational planning that gives us something more than the same old slow buses for the next 50 years. Maybe that’s a streetcar that goes somewhere further than Broadway or a deadend at 23rd & Jackson. Maybe it’s a bus or streetcar that gives us fast, frequent connections to the new Capitol Hill light rail station. And maybe we could be put on the list to get a few light rail stops in the central part of the neighborhood if one is ever planned out on 520 or to other regional destinations.

But for heaven’s sake: we use transit, and many of us are very dependent on transit, so please factor that into some sort of data-driven, results-oriented transportation planning process.

0 thoughts on “Lots of popular, frequent buses in the CD. Upgrade plz!”