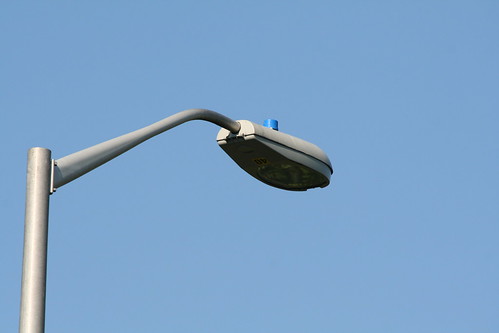 Some lesser “professional” news organizations just throw up the first press release that pops into their inbox. But here at CDNews, our crack team of humans and canines are dedicated to giving you clear, accurate, balanced reporting.

But our news hole hopes were dashed again this afternoon when we struck out on a grueling 4 block walk and found that Cherry Street’s streetlights were the same old boring sodium variety.

We then hit the phones, worked our sources, and talked to the helpful Scott Thomsen, spokesperson for Seattle City Light, who expressed surprise at our report of an LED-less street. He dug into it, checked with the streetlight department, and found further surprise among its management, who were told the work was all done.

But we can now report that a city light manager is on his way out to the scene tonight, to verify our reporting and make sure we know what an LED streetlight is supposed to look like. If confirmed, they’ll further investigate with the installation crews and see what kind of snafu may have befallen the LED installation program.

So stay tuned, and get ready for a less orange, new high-tech glow on the Cherry Street when twilight envelops The Twilight (a CDNews sponsor).

Update: City Light management confirmed that the new LED lights didn’t go in, due to some sick workers on the installation crew. The new schedule is for them to be installed next week, possibly as soon as Monday.