At this time last summer the Central District was suffering through a big wave of burglaries, hitting a high of 82 incidents in August.

But according to our new analysis of 2010 crime stats and police reports, the seasonal peak of summer burglaries is failing to materialize so far this year.

According to East Precinct commander Jim Dermody, the majority of the neighborhood’s burglaries are perpetrated by a few juveniles. Police are tracking a “top 11” list of burglary suspects, and the majority of those are juveniles. Police have been working closely with the county’s juvenile court to reduce the revolving door that has historically returned juvenile burglars back to the community where they continue their crimes.

Police say that one juvenile has been especially busy with multiple convictions.  He was one of two suspects fingered in an occupied burglary near 30th & Columbia last month, spotted by police near 22nd & Cherry, and ID’d by the victim at the scene of the arrest. Captain Dermody calls him a “legendary repeat offender” and says that police are keeping a close eye on him to try and keep him out of trouble.

Want to do your part to avoid becoming a victim of property crime? Watch our video of a Crime Prevention Coordinator’s advice on how to properly secure your home. 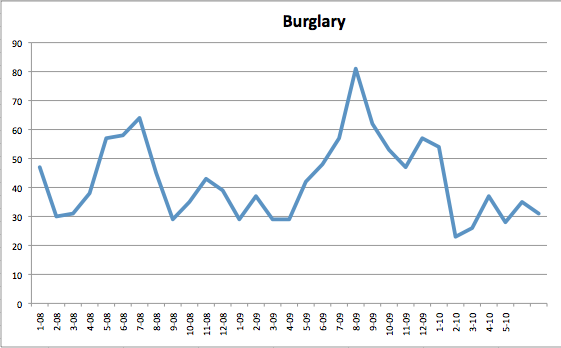