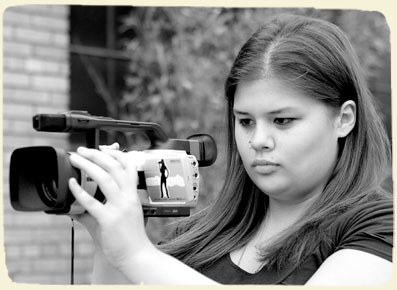 Out of 459 applications, Reel Grrls is one of three organizations and three individual artists to receive a 2010 Mayor’s Arts Award.  Reel Grrls is a Central District nonprofit whose goal is empower girls through film.  As winners of the the this award, Reel Grrls will be recognized by Mayor McGinn at a Bumbershoot ceremony on 9/3/10.  In addition, they will be featured on Seattle Channel programs and City Arts magazine.  They run several summer programs, including the 2010 Summer Apprenticeship Program (deadline is 7/1/10).

Here is the Reel Grrls backgrounder submitted for the award:

Founded in 2001 by Malory Graham, Reel Grrls is an award-winning program devoted to empowering young women through media production.

Reel Grrls’ mission is to cultivate voice and leadership in girls at a vulnerable time in their development. The participants don’t just drop into a computer lab after school – they develop lasting relationships with women filmmakers and learn skills that propel them to leadership roles in their community, college scholarships and careers in the media industry. More than 60 percent of participants, many of whom are low income and at-risk teens, receive scholarships.

In addition to providing young women with access to resources that allow them to create meaningful films, Reel Grrls helps teens showcase their work at festivals and local public screenings. Reel Grrls films have been screened and honored at more than 80 film festivals in the United States and abroad. Recent highlights include winning two Student Emmys from the National Academy of Television Arts & Sciences and official selections in the Los Angeles Film Festival, the San Francisco International Film Festival, the Langston Hughes African American Film Festival and the Seattle International Film Festivals.

For the past two years, Team Reel Grrls, a group of 10 Seattle-area women filmmakers who also serve as Reel Grrls mentors and staff, have received top honors in the International Documentary Challenge. In 2008, Team Reel Grrls won best film out of a pool of 150 international contestants and took home two 2009 jury awards, including best editing.