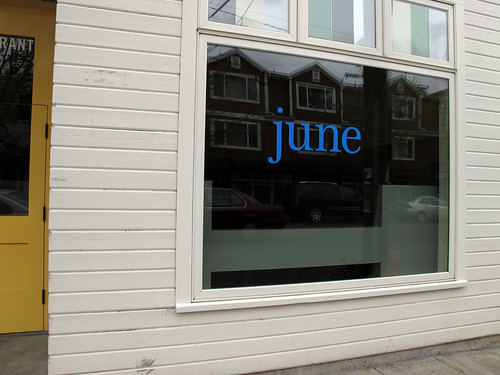 Ever since Cremant closed over a year ago, people have been curious to know what would take the place of the chic and cozy spot on 34th Ave. Last week, signage went up for June, a new French-inspired restaurant headed by chef Vuong Loc.

June will have an invite-only soft opening this Thursday and then open officially on Tuesday, May 11.

Loc owns the well-respected French bistro Portage on Queen Anne and used to own the Pig ‘N Whistle bar and grill in Greenwood.

We talked with his sous-chef Nora Zartman this weekend and she offered some hints about the menu, which will be “a full range of French to American to Southern-style, kind of a melange.” She said you can also expect to see “fun little things like pickles and small plates and bites.”

The Seattle Weekly talked with Loc last month and reported that June will be a bit more casual than Portage, but the private dining room in the back will remain.