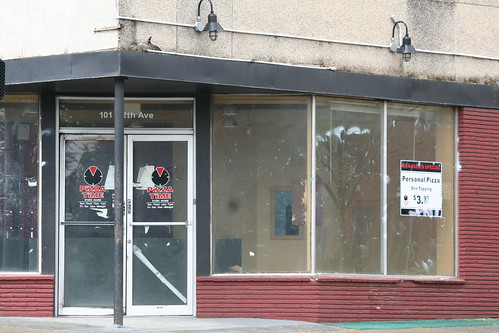 As we reported last month, the Seattle Housing Authority has been expanding its Yesler Terrace holdings east of Boren to the area around 12th & Yesler. They purchased the corner property, formerly home of Pizza Time, in 2003, and over the years have picked up additional parcels north of that.

All of the properties have sat empty since being taken over by the housing authority. In the 12th Avenue Stewardship Meeting on Tuesday, community leader Bill Zosel expressed some annoyance at the impact those vacancies have on the neighborhood and asked a SHA representative whether there was any plan to make better use of the properties while Yesler Terrace plans continue in the planning and design phase.

We followed up yesterday with Virginia Felton, spokesperson for SHA, who told us that the current economic environment didn’t support leasing the retail space that exists at 12th & Yesler. And although she couldn’t give a timeline on when the property might be redeveloped, she said that the existing zoning on the land fits with SHA’s designs, which could decouple it from the much larger Yesler Terrace project that is years from breaking ground.

The SunBreak had a good update on that process yesterday, which could see the addition of thousands of new units of housing and a large new amount of office space to the 70 year old Yesler Terrace housing project. The next public meeting on that is scheduled for April 29th.

In the meantime, SHA says that they are actively trying to expand their property holdings around 12th & Yesler, and have eyes on the two blocks bordered by 12th, 14th, Yesler, and Fir streets. That includes the large King County Elections warehouse, the Urban League building, and several other private properties. SHA already owns a few parcels within that along 13th Avenue.