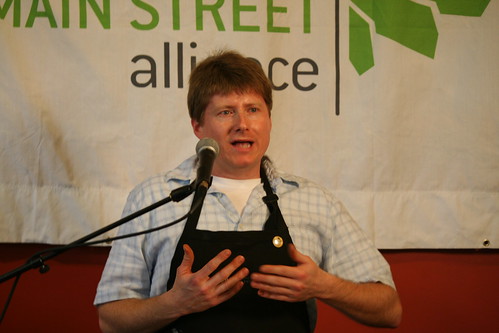 Statewide media filled up the whole shop at SOHO Coffee (a CDNews sponsor) at 20th & Yesler today to hear about the kickoff of a new initiative campaign that would impose a statewide tax on incomes above $200,000 for individuals and $400,000 for couples. Revenue from the new tax would go to lower statewide taxes on property and small businesses, and provide more stable funding for education and healthcare.

SOHO owner Barry Faught spoke and said he supports the new tax because it will remove the burden of the existing B&O tax for small businesses. That tax is based on gross revenue of all businesses, regardless of whether they make a profit or not. He says that’s a tough proposition for small businesses that are trying to stay afloat in the current recession. By contrast, the new measure would only apply to the net income for individuals, excluding the costs incurred in the course of running a business.

The measure would also reduce state property taxes by 20%, saving homeowners an average of $160 a year.

Other speakers at the event included Bill Gates Sr., who has long advocated reforms of the state tax system, and representatives from education, heathcare, and the small business community.

The campaign has until July to collect 241,000 signatures to get the measure on the November ballot, and will use a mix of paid and volunteer signature gatherers to get there.

For more on 1077, see the Seattle Times article from earlier today.