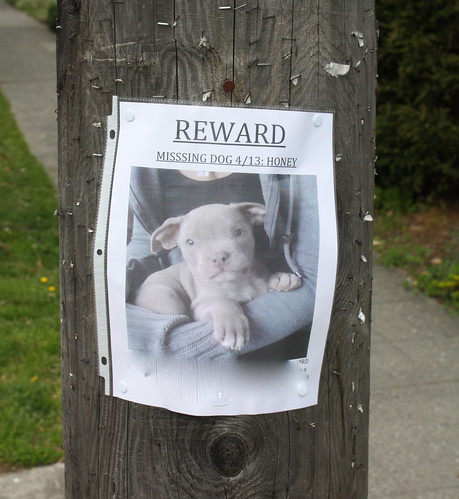 Original report:
A desperate search for a lost puppy turned extraordinarily dangerous Wednesday when the dog’s E. Union owner was robbed of more than $800 in reward money by a man armed with a pistol. The man claimed he knew where the 15-week-old blue-nose pit bull puppy was and tricked the owner into driving to south Seattle where the man took the money and disappeared.

Amelia C. says her boyfriend’s decision to let a man with a gun in his pants waistband into his car was rash, unwise — and done out of pure, desperate love. We’re leaving out the couple’s last names even though they’re on posters up and down E. Union. Given what CHS has learned about the rest of the story, it would be a good idea to pull those posters down.

“We didn’t care about the money. We just want our dog back. It was just pure emotion,” Amelia told CHS today as she and her boyfriend continue the search for their new puppy, Honey.

Amelia told CHS that on Tuesday around 7 PM, Honey managed to find her way out of the backyard under a fence and into the street near 20th and E. Union while Amelia and her roommates were inside their residence. A witness told Amelia that somebody driving a white Lexus had stopped, picked Honey up and drove off.

After her boyfriend’s ordeal, Amelia desperately wants to know who actually has Honey. If you have information, please send [email protected] a note or call/text (206) 399-5959 and we’ll immediately pass your contact info to her. Despite already having been robbed of the $800, the couple is again offering a sizable reward for her return.

The details of the robbery are extremely convoluted. From the Seattle Police Department report on the incident, the situation played out like this. Amelia and her boyfriend Brandon were putting up posters with their names and phone numbers offering a $1,500 reward for Honey’s return. As they were hanging the posters on Wednesday near 23rd and Union, a man approached them and told them he had bought the puppy last night for $50 from a man in a Lexus. The man said he needed a ride to where the dog was so they could complete the handover and give him the reward. Amelia and Brandon decided to call the cops to “mediate” the situation but when they arrived, the man said the puppy was not there but that he’d take Brandon to where Honey was being kept. According to the SPD report, Brandon agreed to drive the man to where the puppy was — against the officers’ advice who were concerned the man “was going take advantage of them and take their reward money.”

The report says that Brandon was directed to drive to an address near 21st and Marion. The man got out of the car and returned with a pistol visible in the waistband of his pants. The man said he needed the gun for protection because “people didn’t like him” in the place where Honey was, Amelia said Brandon told her. The SPD report says the man then directed Brandon toward south Seattle. Amelia told CHS she attempted to follow them in her own car but couldn’t keep up with all the turns and the speed at which Brandon drove.

Brandon told police that during the drive to south Seattle, the man reached into Brandon’s pocket and attempted to grab the reward cash. According to the report, Brandon struggled but stopped when the man said he would kill Amelia if the cash wasn’t handed over. Amelia said Brandon gave up $800 of the reward money but was able to keep the man from stealing the other half. He was also texting her throughout the incident as he drove deeper into south Seattle. At that point, Amelia decided it was time to again call the police.

The SPD report says the man then directed Brandon to stop the vehicle near 39 Ave S and S Brandon where the man got out of the car and said he’d be back in five minutes with the dog. Brandon waited for a half hour but the man never returned. He then drove around the area looking for Honey until Amelia convinced him to stop the search and meet with police.

The SPD report describes the suspect as a black male, approximately 5′ 4″ 160 pounds, wearing a white beanie, a white v-neck t-shirt and blue jeans. Brandon also said the man had crooked teeth and a tattoo that, according to the police report, could have been an insignia for an area gang, Black Gangster Disciples.

Meanwhile, the police have advised the couple to stay away from E. Union so both are staying with family on the Eastside. “The police advised us not to stay there. It’s very scary,” Amelia said.

Amelia said that she and Brandon are still prepared to pay the $1,500 reward and that they have checked every shelter in the area.

“I don’t know what to do,” Amelia said. “There’s no way of knowing if he was just trying to make a quick buck or if he has Honey.”

0 thoughts on “$1,500 reward for lost puppy leads to armed robbery”