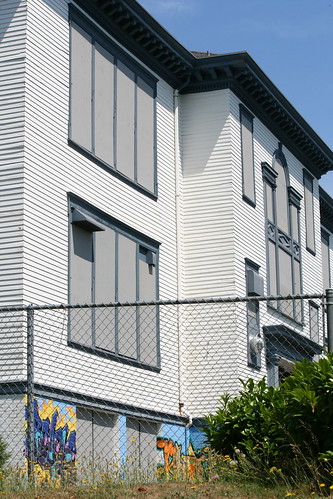 The most popular question from commenters in our Monday story about the potential lease of the TT Minor school building was whether there was similar activity for the Mann building at 24th & Cherry (former home of the Nova program).

We checked with Teresa Whipple, spokesperson at Seattle Schools, who said that yes, there is a lease deal in the works for the Mann building too. The “highest proposal” for the building came from a community service organization called “People’s Family Life Center.” We’re currently doing some additional research to find out who that is and what they have planned for the space (leave a comment below if you know).

The big remaining issue with that lease is the funding – the organization involved is looking to the city and state to help pay for the lease, and given the nature of government finances right now, that could be a challenge.

We also found that there is a time issue that drives the the school district to find organizations to occupy these buildings. Although boardmember Smith-Blum described it as “reverting to the city” in the case of TT Minor, Whipple tells us that the actual issue is one of city permitting. If the building stays vacant for more than 2 years, the city will require it to be brought completely up to modern code before being occupied again. A similar issue faces the old MLK Elementary building in Madison Valley, where the permitting clock runs out later this summer.

There have been additional questions about the TT Minor deal too, with rumored involvement of a daycare or preschool provider. Whipple confirmed that Hamlin-Robinson was the only party to that lease deal, but couldn’t say whether the lease would allow them to sublet extra space to other organizations.

Incidentally, the TT Minor lease will be discussed at a school board Operations Committee hearing today at 4pm.

0 thoughts on “Mann school has a potential leasee too, plus more TT Minor”