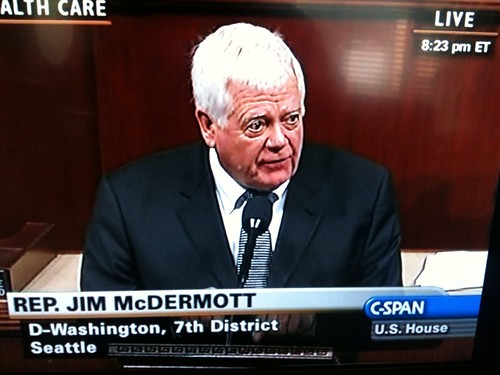 Healthcare reform has just passed the U.S. House of Representatives by a three vote margin, leaving only President Obama’s signature before it becomes law.

Here’s the speech given on the floor by our representative, Congressman McDermott, a few hours ago:

It was never in doubt. Business wanted a change. The medical profession wanted a change, and labor wanted a change. And the Republicans brought an economic collapse to make it clear to everybody that we all are in danger if we don’t change the healthcare system in this country.

Update: And now the Reconciliation Bill has passed too. The next step is for Obama to sign the original legislation, and then for the Senate to take up and pass the reconciliation measure.

I’ve got to say that I’m not normally at all into CSPAN, but I spent much of today watching the proceedings and being really into it (at least when the Fightin’ Texas Aggies weren’t playing in Spokane). So often it’s just a congressman talking to an empty room. But having everyone on the floor, participating, debating was great. But boo on the endless “unanimous consent to revise and extend my remarks.”

BTW – Regular readers might be surprised by the anti-reform comments so far, given the nature of our district. Evidently we were at the top of Google News results for a bit for “healthcare reform” and “obamas speech.”  Here’s the unusually geographically diverse map of traffic from the last hour: 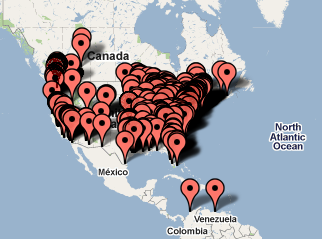