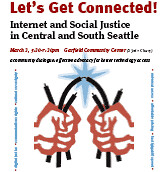 Mayor Mike McGinn was elected in part based on his proposal to connect all Seattle homes and businesses with next-generation fiber-optic Internet service–providing affordability, customer choice, and speeds many times faster than what is currently available to many in Seattle’s underserved neighborhoods of the Central District and Beacon Hill. Between the FCC’s recent call for gigabit-speed Internet, Google’s announcement of fiber-broadband test projects, and Federal broadband stimulus funds, it appears that 2010 could be a big year for Internet access in the US. How will the changes be felt in Seattle?

Participants in the March 3 “Let’s Get Connected” event will be invited to share their own experiences with local Internet access, while community media producers document their stories on audio and video. Featured guest speakers will discuss the history of telecommunications access in central and South Seattle, present-day challenges for fair, affordable access, and ways the City can respond to public outcry for digital justice.

“The neighborhoods of Central and South Seattle have been sidelined in technology access for too long,” said Reclaim the Media director Jonathan Lawson. “Achieving real digital justice means that everyone, regardless of income or zip code, should have equal opportunities to connect, create and innovate, through networks that provide affordability, universal access and gigabit speed.”

Let’s Get Connected is the sixth in a series of community forums sponsored by the Hidmo Community Empowerment Project; it is also the first in a series of public forums on broadband Reclaim the Media plans as part of its Seattle Digital Justice campaign. The forum intends to bring together a variety of community members and civic leaders for productive discussions on an issue of present importance.

Child care and refreshments will be available (please make childcare reservations by Feb 25).

This event is sponsored by the Hidmo Community Empowerment Project, Reclaim the Media, the Seattle Digital Justice Coalition and the NW Media Action Grassroots Network (MAG-Net), with support from the City of Seattle Department of Neighborhoods and Seattle Parks and Recreation. More info: [email protected] or 206.328.7088.