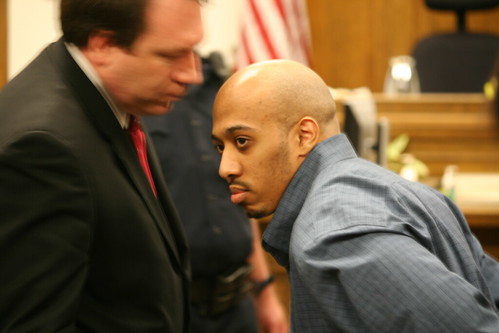 Rey Alberto Davis-Bell was found guilty on all counts, including first-degree murder for the 2008 murder of Degene “Safie” Dashasa at the Philadelphia Cheesesteak Shop at 23rd and Union. The decision came just two days of deliberations.

He now faces a sentence of at least one hundred years in prison. This was not a capital murder case, so the death penalty is not an option. Sentencing will come in a separate hearing in a few weeks.

Dashasa’s cousin told us after the verdict that she was glad justice was done, and that she hoped he would have many years to sit in jail and consider his actions.

Davis-Bell’s attorney, Peter Geisness, said he disagreed with the jury but respected their decision. In particular, he thought that they didn’t properly consider defense evidence of video footage and witness estimates that showed an average-height suspect, ruling out Davis-Bell based on his short stature.

Davis-Bell’s Grandmother and Aunt were present in the courtroom as the verdict was read, and left the courtroom in tears after their relative was led out to the hallway in handcuffs.

Update: More from our friends at The Seattle Times: http://seattletimes.nwsource.com/html/localnews/2011177595_c