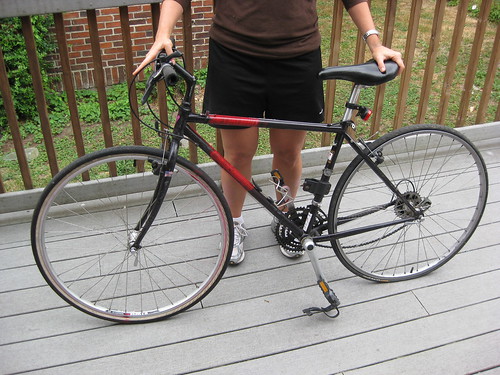 I posted yesterday after I discovered my old commuter bike had been stolen off of my deck.

Another CDN reader, D. left me a phone message about some suspicious bike activity she had seen.  D. and her son were out walking when they saw some (two?) people riding one bike and carrying another.  She thought it looked suspicious so she took note of where they ended up, a house near an intersection not quite a half mile from my house.

I made sure my dog walk today went by this intersection and – sure enough – my bike was there in the yard.  It had already had one wheel taken off and was spray-painted over the identifying decals.

I bee-lined back home and called the non-emergency line.  Within a half hour, Officers Schmidt and Ball (Bell?) came by my house, took a description of the bike, and went to the address.  They were back 10 minutes later with my bike, including the back wheel.  Officer Schmidt obviously knows more about bikes than I do.  He’d reattached the back wheel and from the odd front gear (a biopace), he correctly guessed that it dated from the early 1990s.

The officers said they just went and got the bike without any interaction with the residents.  Apparently one of the home’s recent residents is known to them as a juvenile burglar, but they said there is no way to know who was responsible for my bike.  They also observed some lawnmowers, weed wackers, and other “porch items” in the yard and planned to follow up with the burglary detail about whether any of those items were stolen.

I apologized to the officers for not having reported the bike yesterday (and felt like a bit of a jerk about it, since I did take the time to write a blog post).  They reminded me that all crimes should be reported, since reported criminal activity helps us get more patrol officers in our area.

My bike is now home and locked up.  The back tire needs to be fixed and I plan to head to 20/20 Cycles to keep the positive bike energy in the CD.  Thanks to CDN, observant reader D., and the SPD for helping reunite me with my bike! 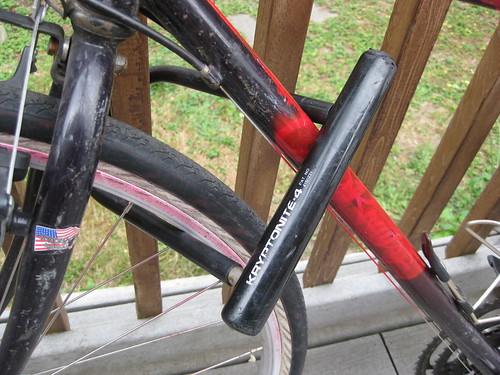 0 thoughts on “Stolen bike recovered thanks to CDN!”